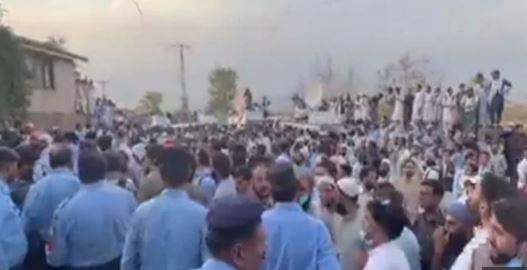 ISLAMABAD, JUN 20 (DNA) — The ad-hoc teachers of Khyber Pakhtunkhwa (KP) seeking regularization continue their sit-in outside PTI Chairman Imran Khan’s home in Islamabad’s Bani Gala area for the second consecutive day as they claim that Pakistan Tehreek-e-Insaf (PTI) has agreed to their demands.

The protesters chanted slogans against the PTI and stopped Shireen Mazari’s vehicle from advancing to Imran Khan’s residence. She was forced to return. The teachers also stopped Asad Umar’s vehicle after which the PTI leader got off and walked to Bani Gala.

However, he was surrounded by the protesters who chanted ‘shame’ slogans. Shoaib Malik, President of Young Teachers Association Mardan, said a written agreement was being signed as the PTI leadership has agreed to their demands.

On Sunday, government teachers from KP staged a sit-in outside PTI Chairman Imran Khan’s home in Islamabad’s Bani Gala area after their talks with PTI leaders failed. The teachers, who were recruited four years ago on ad hoc basis, are demanding regularization and other benefits.

They arrived in the federal capital to protest near Khan’s residence on Sunday, the day the PTI chairman was to address his party’s anti-inflation protest. The protesting teachers first held a demonstration at the Bani Gala Chowk and said that they wanted to communicate their demands to Imran Khan.

After failed negotiations with the PTI leadership, they decided to march toward Khan’s Bani Gala residence. A private television channel reported that some baton-wielding members of the Insaf Student Federation (ISF), the student wing of the PTI, tried to stop the protesters from marching towards Khan’s house but failed.

The teachers, who have been employed at various KP educational institutions on ad hoc basis, want to be treated in the same manner as the regular government employees. Before the talks failed, PTI’s central leader and former information minister Fawad Chaudhry assured the protesters that their demands will be fulfilled.

Chaudhry told the teachers to send their eight to ten representatives to meet Khan and present their demands, but when they went to Khan’s Bani Gala residence no one met them, said Young Teacher Association President Atta ur Rehman.

He said the group waited for 2.5 hours, but not a single PTI leader met them, let alone Khan. “We received calls from Murad Saeed asking us to go back to Peshawar and [hold] a protest there,” said Rehman.

The teachers claimed that they have been terminated for protesting, but they are determined to continue to protest till their demands are met, and a notification is issued.

Asked why they were not protesting in KP, the teachers claimed they feared the heavy-handedness of the KP police working under the provincial PTI government. =DNA