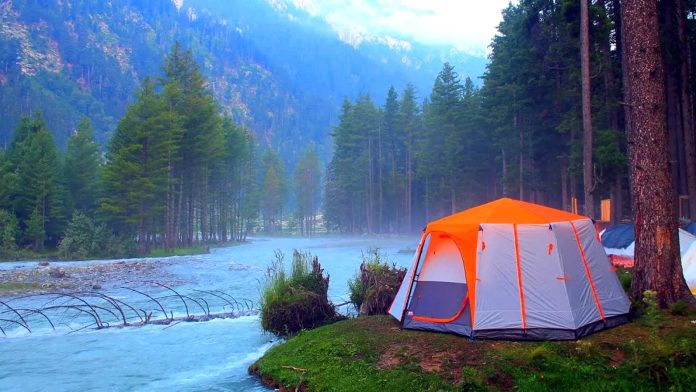 KUMRAT, JUN 19 (DNA) — Bewitching natural beauty, cultural richness and unparalleled hospitality of the diverse tourist’s destinations in Pakistan have always contributed to captivate the attention of local and exotic nature as well as generate handsome revenues.

Kumrat Valley, situated in the Upper Dir district of Khyber Pakhtunkhwa, is also one of the beautiful discoveries of the social media with all its attractions of green pastures, snow clad mountains, the river Panjkora, foggy mounds and imperturbable beauty of the forest.

“The year 2016 proved as a turning point for the hidden beauty of Kumrat Valley to be revealed through social media and soon it became one of the famous tourist’s destinations for the visitors”, Assistant Commissioner, Sheringal, Muhammad Yar Khan said.

“Before 2016, there was not even a single hotel in the valley for the tourists to stay but later on small hotels were constructed in the forests by the local people to facilitate visitors,” he added.

The place is so beautiful that despite a 48 kilometer dilapidated track from Sheringal, Union Council in Upper Dir, tourist embark on this journey to visit the heavenly place. Although, this track was repaired sometimes back but damaged again due to frequent snowfall.

“Despite the poor road conditions, around 6,000 visitors entered Kumrat Valley on the first day of Eid-ul Fitr, 8,000 on the second and 10,000 plus on the third day of Eid,” Muhammad Yar Khan said.

He said for facilitation of the visitors the administration maintains strict law and order. “Not even a single crime was reported during last one year of my posting therefore visitors can freely roam around the valley without any threat.”

Muhammad Yar however mentioned to dearth of good doctors, educationists and other professionals in the area as most of the people after getting good education move to cities or abroad for job purposes.

Former Prime Minister, Muhammad Nawaz Sharif visited the place during his tenure and wanted to give it the status of a National Park. But, local people resisted this proposal fearing that their land and forests would be confiscated by the government.

Pakistan People’s Party government established Shaheed Benazir Bhutto University in Sheringal in 2016 and the PTI government in KPK also focused on forest conservation and promotion of tourism in the areas.

Meanwhile, an official of Khyber Pakhtunkhwa Police, Zaman Khan said that Deputy Inspector General of Police has issued strict instruction to maintain law and order in the area.

“We follow instructions and try to keep the area crime free,” he said but mentioned to language barriers and overcharging by hotels when asked about complaints registered by the visitors.

“Most of the visitors complain of language barriers, extra charging by shops and car parking as well as dilapidated roads,” he added.

Around one million tourists visit the valley during the peak four months of summer season with most of them coming from Punjab and Sindh. This rising number of visitors has risen the number of locally constructed two star hotels to 45 in addition to small huts.

The hotels capacity sometimes fall short to accommodate the visitors that make local people to fleece the tourists charging them Rs 8,000 to Rs 15000 per night.

“This is irritating. We go there for leisure time but the local fully benefit from our presence over there by charging much more than the actual price,” said a visitor Adnan Chaudhry, hailing from Faisalabad.

“If the nature has bestowed them with its bounties, they should care for the fellow visitors. Procinvial authorities should devise a pricing mechanism for the tourists visiting this area,” he said.

He said, “we can understand that they have only seasonal income as there are lesser opportunities of earning during harsh winter. But, the rates should be convenient to both sides.”

More than 70 percent area of the valley comprises forest while 30 percent of barren land. The people in the valley lack proper source of income and most of them migrate to other cities for job purposes.

Major agricultural crops of this area are potatoes and apple gourd (Tinda). However, the weather is also favorable for growing winter crops in summer season which are supplied to main cities.

The trees falling in the forest due to heavy rains or fast winds is another source of income for them as selling these trees in the market brings 60 percent share to local people and 40% to the government treasury.

Since, this is very low literacy rate area, the Assistant Commissioner informed that his office has written to the provincial authorities for construction of high schools for boys and girls.

Population in this area comprises 70 percent Kohistani and 30 percent Gujjars and language usually spoken is Kohistani as this area links to Indus Kohistan starting from silk route down to Kohistan, Palas, Shangla and Kalam. But, they all also know Pashto well.

This area is so beautiful that whatever the hardships, the tourists cannot be oblivious to enchanting beauty of Kumrat blue water, Jahaz Banda, Badgoi Top, Gwaldai Dara and Sundarai Dara and upcoming beautiful lakes planned by the provincial government for the tourists. =DNA