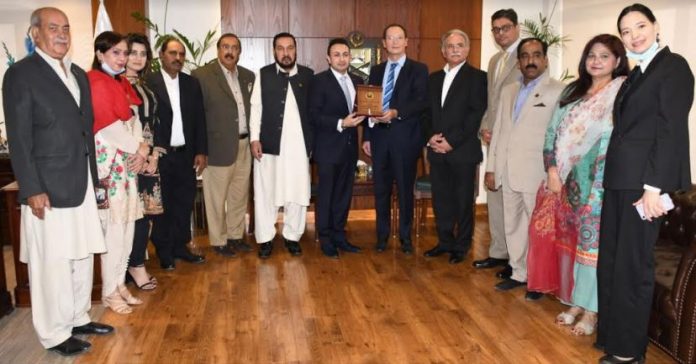 ISLAMABAD – Erik Beishembiev, Ambassador of Kyrgyzstan to Pakistan said that his country greatly valued its relations with Pakistan and was keen to develop strong trade and economic ties with it as both sides have great potential to diversify and expand bilateral trade in many areas. He said this while addressing the business community during his visit to Islamabad Chamber of Commerce and Industry

He identified mining, industry, agriculture, banking, textile production, pharmaceuticals, JVs for the processing and sale of agricultural products as the most promising areas for bilateral cooperation between Pakistan and Kyrgyzstan. He said that the inauguration of CASA 1000 was planned this year, but the Covid-19 pandemic has caused its delay. He said that Kyrgyzstan has weekly flights from Pakistan for its students and was considering launching regular flights between the two countries that would help in improving bilateral trade as well.

Speaking at the occasion, Sardar Yasir Ilyas Khan, President, Islamabad Chamber of Commerce and Industry (ICCI) said that Pakistan and Kyrgyzstan were enjoying friendly and cordial relations at political level that should be transformed into growing trade and economic relations between the two countries. He said that the current volume of bilateral trade between the two countries was quite nominal and emphasized that strong efforts from both sides were needed to improve it. He stressed that both countries should focus on establishing direct linkages between their private sectors to explore all untapped areas of mutual cooperation. He said that Pakistan could export many products to Kyrgyzstan including pharmaceuticals, surgical instruments, leather and sports products, but insufficient direct links between the two countries was a major hurdle in promoting two-way trade.

ICCI President said that Pakistani products were very competitive with affordable prices and emphasized that the Kyrgyzstan embassy should share the information about its major imports so that Pakistani exporters could make efforts to export those products to his country and capture a better market share in Kyrgyzstan. He said that ICCI was in the process of discussing some avenues either in Pakistan or Kyrgyzstan to bring the business community of both countries at one platform so that they could interact and explore prospects for further enhancing bilateral trade. He said that Pakistan and Kyrgyzstan should consider signing a free trade agreement and address all trade barriers between the two countries in order to boost trade and exports. He said that establishing direct air links between the two countries was very important to increase trade relations and people to people contacts.