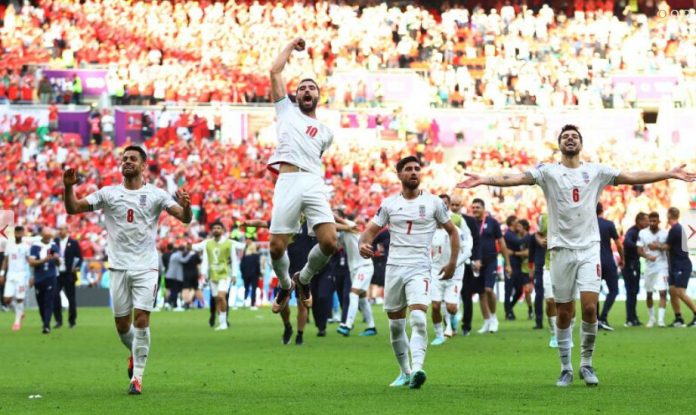 It had been building up to that first goal and when it came, there was delirium, pandemonium and an eruption of emotion.

Iran had finally broken through against 10-man Wales and when the goal came, their players’ joy on the pitch translated to the stands where hordes of their frenzied fans cheered in delight, their roars reverberating across Ahmed Bin Ali Stadium and into the desert beyond.

Eight minutes into time added on, Wales — having lost goalkeeper Wayne Hennessey to a red card in the 84th — had half-cleared a ball into the box and it fell to Rouzbeh Cheshmi and the Iranian substitute planted a superb curling shot from 25 yards that stayed low and crashed into the back of the net.

It was devastation for Wales and more was to come three minutes later as they looked to equalise only to get caught on the counter and Ramin Rezaeian raced clear to send a delightful dink over substitute goalkeeper Danny Ward to seal victory for Iran.

For all that Iran have been through, this was massive. Sardar Azmoun on the touchline grabbed coach Carlos Queiroz’s neck in celebration. Striker Medhi Taremi, who had provided his side with endless running, sank to the ground.

The 2-0 win kept Iran alive at the World Cup in Qatar; victory in their final Group ‘B’ game against the United States — a grudge match considering the political rivalry between the two countries — will send them through to the next round.

“We need to finish the job,” Quieroz said after the game. “It was a wonderful day for us … we stuck to football. The players were brilliant, they deserve all the respect. People will now understand that these boys love to play football.”

Wales, in their first World Cup in 64 years, had scored a late goal to steal a point against the US in their opening game. Now they need to beat England and hope the Americans do them a favour against Iran. But how they recover from this will be crucial.

“We’re gutted,” said Wales captain Gareth Bale. “It’s going to be difficult to qualify as it now depends on the other game but we have to recover and try again.”

The intensity of the game matched the searing heat at the venue, built as the anchor point of the desert, but the cacophony of deafening roars, trumpets and drums was in stark contrast to the tranquility of the dunes beyond.

There were tears, jeers and whistles in the crowd as Iran’s national anthem was played but their players, who did not sing it in their opening game against England in solidarity with women protesters back home, could be seen moving their lips to the tune.

Iran’s journey at this World Cup in Qatar has been about more than just football; their players have been urged to do more in being vocal about the situation in their homeland where a government crackdown on protesters since September, sparked after 22-year-old Mahsa Amini died in police custody after being arrested for not following the country’s strict dress code, has seen 410 people reportedly killed.

Events back home coach Queiroz reasoned, had affected them as they were pummelled 6-2 in their Group ‘B’ opener. On Friday against Wales at the Ahmed Bin Ali, where the air-conditioning had made the sweltering desert heat in the afternoon bearable, Iran were showing greater resolve.

Azmoun, one of the first players from Team Melli who had been vocal on social media about the situation in Iran before he later deleted those posts, had been reinstated to the starting line-up, having started on the bench against England. His presence on the pitch provided Iran with greater potency in attack and their fans erupted in celebration when they had the ball in the back of the net 16 minutes in.

Wales had just missed a glorious chance at the other end when Kieffer Moore shot straight at goalkeeper Hossein Hosseini. But at the other end, Ali Gholizadeh and Azmoun combined for a series of dizzying passes through the heart of the Welsh defence but Gholizadeh’s goal was disallowed for offside.

Wales saw more of the ball but the continuous Iranian hustling kept bothering them.

Iran came firing off the blocks in the second half and seven minutes in, they were twice decided by the width of the post in the space of a few seconds. Azmoun had been set free on the right and as the Iranian fans behind the goal gasped in anticipation, his shot came back off Hennessey’s near post. The ball fell to Ali Gholizadeh and his curler from outside the box hit the left post before, in a remarkable series of events, Azmoun’s header from the rebound was straight at Hennessey.

Immediately at the opposite end, Moore saw his header land on the roof of the Iranian goal. The game was waiting for its moment to erupt and almost got it when Saeid Ezatolahi’s shot from outside the box that seemed destined for the back of the net was palmed away by Hennessey.

It was Hennessey’s moment of madness, though, with six minutes to go that set the match alight, the crowd on its feet. Taremi had got on the end of a long ball but the Welsh goalkeeper came charging out of the box and took him down. An initial yellow card was turned to red after VAR intervened. Then came the drama.