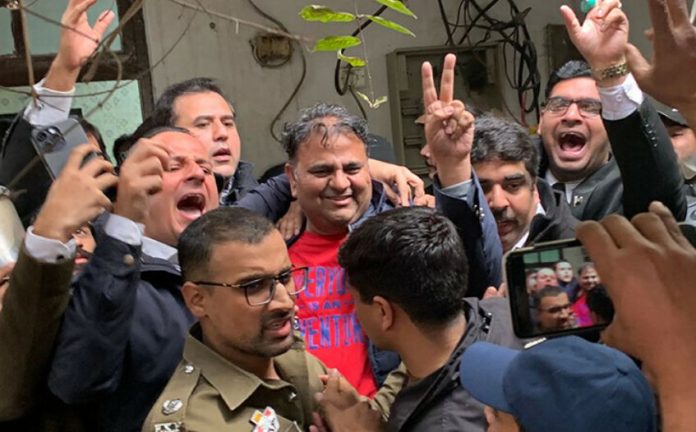 LAHORE, JAN 25: The Lahore High Court (LHC) on Tuesday dismissed a petition challenging the arrest of PTI leader Fawad Chaudhry who was arrested earlier today for “inciting violence against a constitutional institution”.

The former federal minister was taken into custody early Wednesday morning after an FIR against him was registered at Islamabad’s Kohsar police station by an official of the Election Commission of Pakistan (ECP) for “threatening” the electoral body’s members and their families.

According to Fawad’s brother, the former federal minister was “taken away” in four cars that did not have any number plates at 5:30am. Faisal Chaudhry said that the family was unaware of Fawad’s location at the time.

“We are also not being given any details of the FIR registered against him,” he said. Faisal, who is also a prominent lawyer, termed his brother’s arrest “illegal” and asserted that he will fight this battle in court.

Separately, a petition was filed in the LHC by Fawad’s cousin Nabeel Shahzad against the arrest. The application — a copy of which is available with Dawn.com — named the Punjab government, provincial police officer, counter-terrorism department, deputy inspector general of police (operation) and station house officer of Defence A as respondents in the case.

It said that the PTI leader was apprehended “illegally, unconstitutionally and without legal authority” and demanded that police officials should be directed to recover Fawad from the “illegal and unlawful confinement” and produce him before the high court.

At the outset of today’s hearing, Justice Sheikh instructed the police to present Fawad in court by 1:30pm. However, when the proceedings resumed at 2pm, Punjab Advocate General (AAG) Chaudhry Muhammad Jawad Yaqub said that he was not in the position to tell where Fawad was.

On the other hand, PTI lawyer Azhar Siddique told the court that they had just learnt that Fawad was being taken to Islamabad.

“The orders that I give, I make sure they are implemented,” Justice Sheikh said here. “Even if he [Fawad] has reached Islamabad, bring him back and present him before the court.”

In his response, the AAG said that he will ensure that the court’s orders were executed and sought some time. Subsequently, the hearing was adjourned for 30 minutes.

When it resumed, the judge inquired: “Where is Fawad?”

The AAG replied that Fawad was in the custody of the Islamabad police after which Justice Sheikh summoned the inspector generals of Islamabad and Punjab to court.

“The IGs of Islamabad and Punjab should appear in the court by 6pm,” he said and instructed the LHC registrar to immediately communicate the orders to them.

But only the Punjab IG was present when the hearing resumed shortly after 6pm.

Fawad’s lawyer stated that his client had not been presented in court yet again. “It is alarming that he was not produced before the court despite the court’s directives,” he said.

For his part, Punjab IG Dr Usman Anwar informed the court that he was present in Rahim Yar Khan where mobile signals were weak. “I received the court’s directives regarding Fawad once mobile signals started working,” he said, asserting that the court could “check his track record”.

He maintained that he had tried to get in touch with Islamabad police but was unable to do so, adding that his “operator” was still making efforts in this regard.

Meanwhile, the AAG presented a copy of the case registered against Fawad. “On the basis of this FIR, the Islamabad police got in touch with the relevant police station in Lahore to make the arrest,” he said, adding that a local court then granted police the PTI leader’s transitory remand.

He further said that Fawad was “not being held hostage”, telling the LHC that the PTI leader’s lawyers were present for the remand hearing.

However, Fawad’s lawyer Siddique told the court that he wanted his “kidnapped client” to be presented before the court. “I have never before witnessed this where the court issues directives for producing someone four times and the person is not presented.”

He further said that the entire “process” was indicative of malice on the police’s part. “There has to be a reason why Fawad is not being presented before the court,” he said.

Siddique said that the speech on the basis of which the FIR was registered was delivered at 5pm whereas the case was registered at 10pm. He questioned when the police investigation had taken place, adding that the sedition charges against his client were “political” in nature.

At one point, Justice Saleem asked Fawad’s lawyer Azhar Siddique what exactly he wanted from the court.

“We want the court’s directives to be followed and for Fawad to be produced before the court. We want the arrest to be declared illegal,” the lawyer replied.

“What is illegal in Fawad Chaudhry’s arrest?” Justice Saleem asked. “He was arrested and then presented before a relevant court in Lahore.”

He told Fawad’s lawyer to approach the Islamabad High Court (IHC) against his client’s arrest and subsequently dismissed the petition.