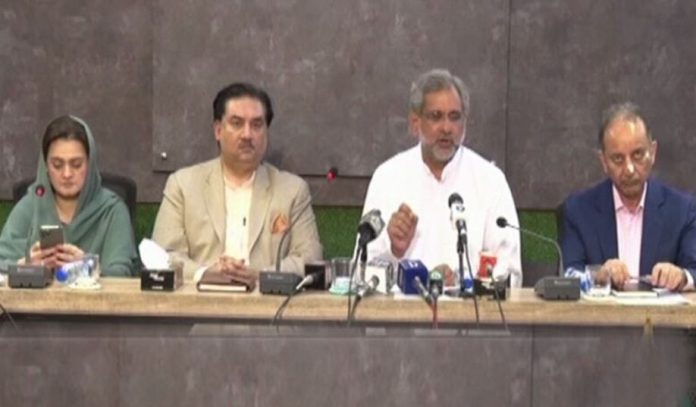 ISLAMABAD: PML-N leader and former prime minister Shahid Khaqan Abbasi said on Monday that the duration of loadshedding would be reduced to three-and-a-half hours from tomorrow (Tuesday).

He made the announcement while addressing a press conference alongside State Minister for Petroleum Musadik Malik, Minister for Power Khurram Dastgir Khan and Information Minister Marriyum Aurangzeb.

Abbasi began the press conference by presenting the reasons for the energy shortfall, holding the former government responsible. The country’s electricity demand has exceeded 25,000MW during the summer, he said.

He highlighted that when the current government assumed charge, the electricity generation capacity was at 17,000MW which was increased to more than 21,000MW over the past three weeks.

He went on to say that the government and cabinet apologised to the people for the current loadshedding, but asked for time to resolve the existing issues.

“Today, we are producing 21,000MW which means we have a shortfall of 4,000MW,” he said, adding that this translated into a little more than four hours of loadshedding to fill the supply and demand gap.

We have decided that from tomorrow we will reduce this loadshedding to three-and-a-half hours, he said, adding that additional money had been paid while oil had also been arranged to ensure this. “We are hopeful that by tomorrow loadshedding will be reduced to 3.5 hours.”

He expressed the hope that the government would be able to reduce this further during the month of July.

The PML-N leader further said that the government was not interested in making excuses and was focused on fixing the issues plaguing the country. He lashed out at the former government for the lies it told regarding establishing power plants, saying that Pakistan was unable to fulfil its electricity demand for the summer.