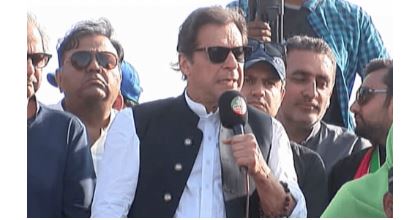 Long march day 6: Imran Khan has said ‘those controlling NAB saved these crooks’. He continued: “All officers investigating Shehbaz’s corruption cases died one after another.

“No one asked how did they died all of a sudden. […] Then Imran Raza was another officer was conducting probe, later it transpired that he also died.

“We cannot fix the system until the powerful are brought under the law. But there were hidden hands [helping them] and these people would not get convicted.

“[…] We could not do anything. NAB was not in my hands. Those who were controlling NAB saved these crooks.”