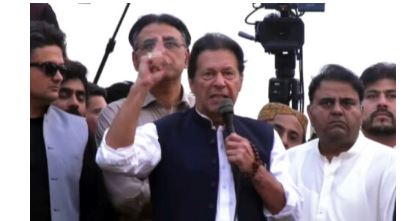 Muridke, OCT 30: Long March: Imran Khan says ‘journalists leaving the country’ as he decries ‘rule of fear’. In speech at Muridke, Imran refutes Shehbaz’s claim that he reached out to him to suggest army chief candidates

Once again calls on CJP to ‘bring those above the law, under it’

Says ‘we are with our army, our criticism is constructive’

This is the second such march by Imran this year; first was on May 25 and fizzled out after PTI reached the Red Zone