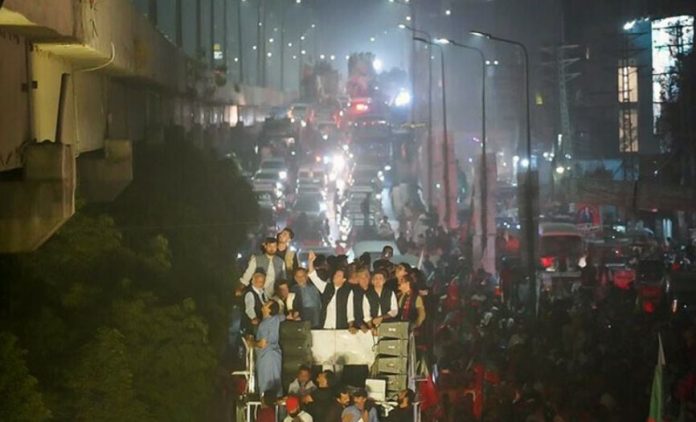 LAHORE, OCT 28: Long march redux: Imran Khan tells ‘handlers’ no one can stand against ‘flood of people’. Addressing the participants of the march, Imran Khan said, “I am starting the most important journey in the political journey of 26 years, the time has come for us to start the journey of real freedom of this country.”

“My march is not for politics, not for elections or personal interests, but only for the purpose that the nation should be truly free, our decisions should not be in Washington or Britain, but Pakistan’s decisions should be in Pakistan and for the people of Pakistan,” he said.

After a period of almost six months, on Friday another long march of PTI will proceed towards Islamabad. This long march will start from the famous Liberty Chowk area of the provincial capital.

On the first day, PTI will hold a power show in Ferozepur Road, Ichhra, Mozang, Data Sahib and Azadi Chowk during its tour.

On the second day of the march, PTI’s next destination will be Tehsil Muridke of Sheikhupura, where after the power show, the convoy will go to Tehsil Kamoke of Gujranwala and stay. After the rally, the long march will proceed towards Gujranwala city. A big public gathering has been announced there as well.

After Gujranwala, the next destination will be the tehsils of Sialkot, Daska and Sambrial. Power show will be demonstrated in both the tehsils including the city.

Afterwards, the caravan will stop at Wazirabad and from there the march will move to Gujrat, where Chief Minister Punjab Chaudhry Pervaiz Elahi and former Federal Minister Moonis Elahi will welcome the march and a big rally will be held. From here the next destination will be Lalamusa and Khariyan.

The next day, the march will go to Jhelum district of PTI senior leader Fawad Chaudhry. The former federal minister will welcome the march and a big power show will be demonstrated.

Then Imran Khan’s long march will move to Rawalpindi via Gujar Khan and the PTI chairman will formulate a final strategy for advancing towards the capital city.

At Rawat, convoys from North and South Punjab Sargodha, Chakwal, Mianwali, Bhakkar, Leh will also join in the long march.

Earlier in a video statement, the former PM said that the ’real freedom’ march is starting from Liberty Chowk on Friday, adding that this long march is not for any personal interest, and not to topple anyone’s government.

“PTI’s march is for true freedom after the freedom gained from the British because we want a country in which decisions are made by Pakistanis, not by foreign puppets,” he added.

Imran Khan vowed that the PTI will continue to fight for real freedom until the doors of foreign conspiracies to get power are blocked.