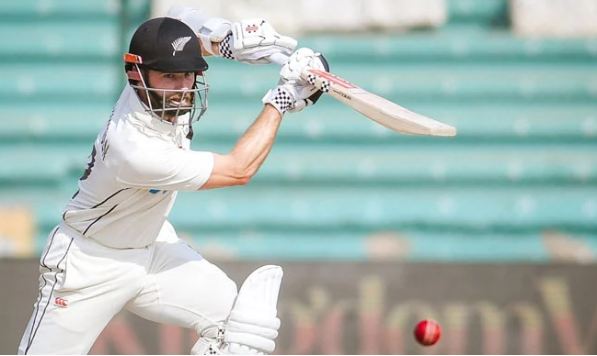 KARACHI: Kane Williamson survived two stumpings and a leg-before decision as New Zealand reached 353-4 at tea Wednesday on the third day of the first Test against Pakistan.

At the break, Williamson and Tom Blundell were unbeaten on 66 and five respectively as the tourists trailed Pakistan’s first innings total of 438 by 85 runs.

Any first innings lead will be handy for either side to press for victory on a National Stadium pitch likely to take more spin on the last two days.

Williamson built on a solid foundation laid down by openers Tom Latham, who cracked 113 en route to his 13th Test century, and Devon Conway, who fell for 92.

Nauman was unlucky not to have dismissed Willimson on 15 and then 21 when wicketkeeper Sarfaraz Ahmed failed two stumping attempts with the batter well short of his crease both times.

Williamson, who also overturned a leg-before decision against him on 13, added 65 for the fourth wicket with Mitchell.

Mitchell smashed seven boundaries and a six including four consecutive fours off pacer Mohammad Wasim after Pakistan took the second new ball at 272-3.

Earlier, resuming on 165 without loss, New Zealand were lifted by Tom Latham’s 13th hundred — the most by a New Zealand opener.

Latham swept Ahmed for a single to reach three figures, eclipsing John Wright’s 12 centuries as an opener for New Zealand.

He was finally dismissed for 113 after miscuing a reverse sweep and was caught in the slip.

Latham and Devon Conway put on 183 for the first wicket, beating the New Zealand record against Pakistan of 181 set by openers Mark Richardson and Matthew Bell at Hamilton in 2001.

Conway was trapped leg before by Nauman for 92 after striking 14 boundaries in his fifth Test half-century.

The Pakistan camp has been hit by viral flu with neither skipper Babar Azam nor Agha Salman taking the field in Wednesday’s first session.