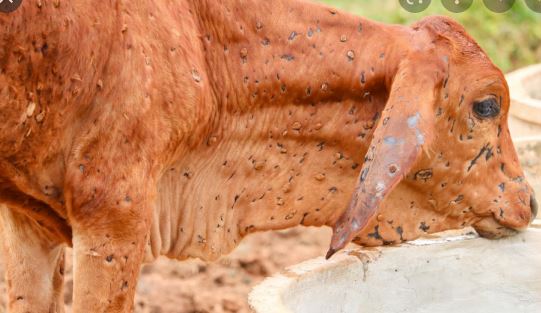 From Our Correspondent
PESHAWAR, JUN 27 /DNA/ – A meeting to review the latest situation of Lumpy Skin Disease of cattles in the province and steps being taken to control the spread of the disease was held here on Monday with Chief Minister Khyber Pakhtunkhwa Mahmood Khan in the chair. The meeting deliberated upon matters pertaining to contain the spread of the contagious disease and several important decisions were made to this end. Provincial Minister for Finance Taimur Saleem Jhagra, Chief Secretary Dr. Shehzad Bangash, Principal Secretary to CM Amjad Ali Khan, Secretary Livestock Muhammad Israr and other concerned officials attended the meeting.

While briefing the meeting about the latest situation of Lumpy Skin Disease, it was told that first case of LSD was reported in April this year from DI Khan and so far thousands of animals had been affected across the province adding that 25 districts had been partially affected by LSD whereas mortality rate of LSD is up to Five percent. It was told that in the wake of forthcoming Eid-UL –Azha, the risk of LSD spread could increase due to increased movement of cattles into the province.

Touching upon the measures being taken to contain the spread of LSD, it was informed that LSD task force had been established at provincial level while animal check posts were established at provincial and Districts entry points. It was added that anti Tick Spray Campaigns were carried out covering the 0.8 million animals. Similarly, 274000 doses of vaccine had been procured and supplied to affected districts. Moreover, a mobile application had been developed for timely reporting of LSD cases. It was decided in the meeting to provide the required funds to live stock department on urgent basis for purchasing more anti LSD vaccine.

The chief minister on the occasion, directed the quarters concerned to ramp up efforts to contain spread of LSD and put in place an effective mechanism for all time monitoring of LSD. He also directed the Finance and Livestock Departments to finalize all matters related to the release of required funds for purchasing more vaccine and said that the provincial government would provide all required resources to this end on priority basis.