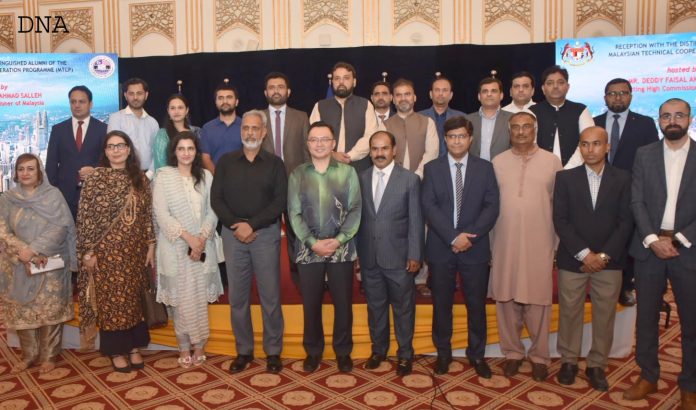 The reception was attended by 92 distinguished members of the alumni who has attended the programme in Malaysia. Also present were former Pakistani diplomats who were previously posted in Kuala Lumpur including Lieutenant General Tahir Mahmood Qazi (Rtd.) The purpose of the reception is to promote continuous engagements and foster a long-lasting and strong bond of friendship with all government officials who have attended the MTCP courses in Malaysia.

It is also to establish closer relations and strengthen networking between the High Commission of Malaysia in Islamabad and former MTCP participants, particularly from Pakistan. Malaysia attaches great importance to its bilateral relations with Pakistan.

The long standing bilateral relations and close cooperation between our two brotherly countries have covered various areas in trade, investment, education, tourism, culture, defence and technical assistance on human capital development. Acting High Commissioner of Malaysia Mr Deddy Faisal Ahmad Salleh stated in his remarks that MTCP reflects Malaysia’s commitment to South-South cooperation, particularly technical cooperation and formulated based on Malaysia’s principle that the development of a country depends on the quality of its human resources.

In addition, Malaysia sees MTCP as integral towards strengthening mutually beneficial bilateral relations. Mr Deddy Faisal added that this is also in line with the idea of “Keluarga Malaysia“ or Malaysian Family based on the values of inclusion, togetherness and gratitude which was introduced by Prime Minister Dato’ Seri Ismail Sabri Yaakob. Malaysia, with its pluralistic society, had implemented and translated the fiqh of al-Ta’ayush which laid down three main principles in building good fraternal relations with all components of society. The three main principles are : 1. Brotherhood among fellow Muslims (ukhuwwah Islamiyyah); 2. Brotherhood among fellow citizens (ukhuwwah wataniyyah); 3. Brotherhood among fellow human beings (ukhuwwah basyariyyah). Ukhuwah basyariyah is based on a brotherhood that grew and developed on universal human values regardless of racial, religious, tradition, belief and cultural background. Mr Deddy Faisal highlighted that the Malaysian High Commission is planning to offer more courses in various sectors for Pakistan, such as agriculture, economy, finance and trade, education, environment, industrial technical training, diplomacy, public management and administration, professional services, social development and science, technology and ICT.

The envoy reiterated the Malaysian High Commission’s commitment to sharing developmental experiences and expertise by providing various human capacity-building programmes and technical assistance to Pakistan in the coming years. “Hopefully the MTCP participants would utilise the knowledge and experience to further contribute for the betterment of Pakistan,” the Malaysian envoy added.

Annually, Malaysia’s flagship MTCP offers more than 60 technical training and capacity-building programmes in vast areas of development in collaboration with leading local training institutions and international development partners. Mr Deddy Faisal said that the Malaysian Government aims to encourage more future participation from Pakistani officials in the MTCP, as it would not only be beneficial for the bilateral relations but it would also assist in the career development of the participants.

Mr Deddy Faisal also stated that Malaysia’s trade relations with Pakistan have been encouraging. In 2021, the bilateral trade has grown to 36.3% and our total trade is worth 1.901 billion US Dollars. A majority of this total trade volume is contributed by the export of Palm Oil and palm Oil Based Agriculture Products which account to 51.9% share of this total volume. Malaysia has been ranked first among 135 countries in the Global Islamic Finance Development Indicator and first among 81 in the Global Islamic Economy Indicator, both for the 9th year running.

Mr Deddy Faisal ended his remarks by saying that : “No man is an island entire of itself: every man is a piece of the continent, a part of the main”. Likewise, I believe no nation no matter how strong or advanced can succeed alone or can remain resilient as we continue to face the challenges that lie ahead.

However, if we pool our strengths together, join hands in enhancing our efforts at integration and work towards the achievement of progress and shared prosperity, I believe we will succeed