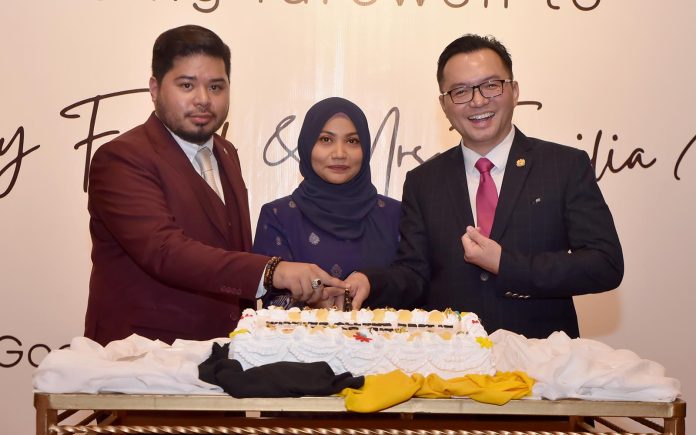 Malaysian envoy given a warm send-off

ISLAMABAD: A reception was held in Islamabad Serena Hotel on 26 October 2022 to bid farewell to the Malaysian envoy, Mr Deddy Faisal bin Ahmad Salleh. It was hosted by HE Abdul Mubdi Osman, Acting High Commissioner of Brunei Darussalam.

Mr Deddy Faisal is leaving on Friday, 28 October 2022 at the end of his diplomatic posting. He arrived in Islamabad on 19 August 2019 and has served as Minister Counsellor at the Malaysian High Commission in Islamabad for 3 years 2 months and 10 days.

The reception was attended by the who’s who of the Islamabad community including High Commissioners of the Commonwealth countries, Ambassadors, Senators, Parliamentarians, prominent businessmen and members of the Chambers of Commerce. Those who attended the reception expressed their appreciation and admiration for the friendship and great cooperation extended by Deddy Faisal during his posting to enhance and strengthen the relation between Malaysia, Pakistan and also countries around the region. They also commended that the Malaysian envoy is an exemplary diplomat who is always proactive and maintains a close network with all layers of the Pakistani society.

Reminiscing about his good time spent in Pakistan, Deddy Faisal said one good thing about being a diplomat was that you make friends and establish networking wherever you go. The job was made easier with Pakistan being Malaysia’s good friend especially in both bilateral and multilateral platforms. Pakistan and Malaysia he said enjoyed deep, cordial, friendly bilateral relations and the people here have always been generous, hospitable and friendly.

He remarked that he looked forward to an enhanced and more intense economic activities between the two countries as Pakistan has been taken out of the list of jurisdictions under increased monitoring or often externally referred to as the “grey list” of FATF in which Malaysia has often provided valuable support to Pakistan. Malaysia and Pakistan will further strengthen and expand the bilateral economic, trade and investment ties in the traditional and non-traditional sectors, including by leveraging on the strategic location of both countries to serve as a trade gateway to the vast market in the Southeast Asian, East Asian and the South Pacific regions, and the South Asian, West Asian, Central Asian and Southern Chinese regions, respectively, he added.

Throughout his posting in Islamabad, Mr Deddy Faisal said that his country’s bilateral relations with Pakistan have witnessed an upward trend which was reflected in exchange of visits at the highest political level and signing of important agreements. Mr Deddy Faisal reaffirmed the strong and enduring bonds between the two fraternal countries marked by warmth, cordiality and mutual trust.

It must also be noted that bilateral trade between Pakistan and Malaysia saw remarkable uptick as the country’s exports increased to US$460 million – the highest figure ever  in 2021-22 taking total trade volume to US$ 1,723 millio