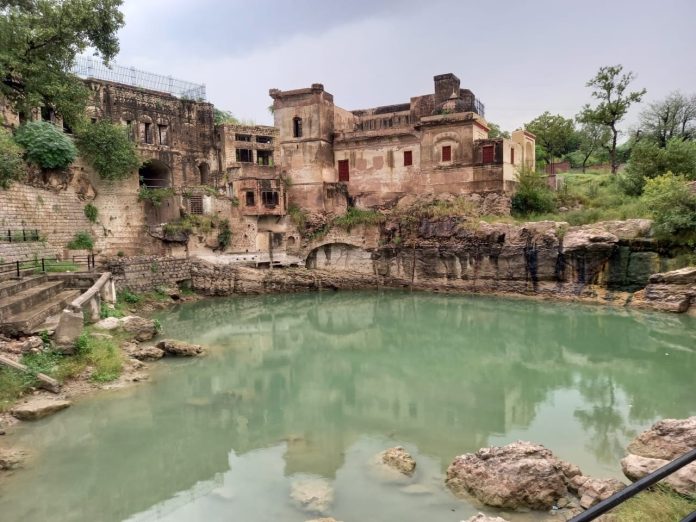 About 5,000 years ago, a civilization budded along the coast of the River Indus – also known as the Indus Valley Civilization. Over the course of thousands of years, this civilization expanded and grew; however, it stands true even today that before matters like caste and creed came into existence, there was only one thing uniting everyone:

A river and a sense of belonging to it.

As the prodigy of a civilization that lived harmoniously under one united name, preserving monuments that exhibit this harmony is essential. One prime example is that of the Katas Raj temples near Chakwal; a manifesto of cultures from the 7th century that is now in ruin. Apart from the Hindu temples and Buddhist stupas present there, the site is best known for the lake that exists at its heart. I had the opportunity to not only see this lake – which according to a fascinating myth was formed when Shiva, the God of Destruction wept over the death of his wife Sati – but also research its chemical composition to check its impurity. To this day, the lake acts as a religious and cultural nexus for the Hindu, Buddhist, and Sikh communities.

Even after thousands of years, the temples are a sustainable architectural masterpiece with a flux of cultures and influences incorporated into their construction. All the temples at the site can be divided into two categories. Firstly, the ones that have been directly influenced by the Gandhara tradition. Secondly, those that have been inspired by the Kashmiri temples whose chief characteristics were dentils, trefoil arches, fluted pillars, and pointed roofs. Most of these temples were in a very ruined condition, built of soft friable sandstone which was crumbling away.

The remains of the temples also form an important link in the history of this region and South Asian temple architecture. The temples have plain masonry walls and cantoned corner pilasters, and the sub-shrines are elevated to form a series of cornices with tiny intermediate rows of pillars and a crowning ribbed dome. The picture on the left below shows the Hanuman Temple which has been largely influenced by Kashmiri architecture and is undecorated and lime-plastered. It houses a series of rock stairs that cover three storeys and lead to a roof (shown on the right). The roof offers a spectacular view of the police station made during the British era and shows its relatively modern architecture.

But its most unique architectural characteristic is the presence of a lake at the very center of the temples whilst keeping the construction safe from damage due to water. This was made possible because the mandirs and balconies, as well as the pillars made to support them, were made purely from piled-up stone. This, along with the limestone domed roofs that prevented the accumulation of rainwater, shows the sustainable design of the complex.

The site is also famous for the Sat Ghara – meaning the seven temples that have been dedicated to different Hindu deities. These include the Ramchandra Temple, Hanuman Temple, Shiva Temple, etc which have been used as worship places by pilgrims over the years. These temples can be approached via a set of limestone stairs that have been recently added. Out of the seven temples comprising the Sat Ghara, only four are left and are open to tourists now.

The remarkable architectural design calls for a further approach to sustainable restoration to utilize the vast potential the site has for tourism. Restoration projects for the temples have been initiated twice now, once in 2006 when the Deputy Prime Minister of India, Advani, visited the temple complex, and secondly in 2017 under Prime Minister Nawaz Sharif. The picture below on the left shows the limestone stairs that were recently added. On the left, colorful designs on the roof of the Ramachandra temple are shown.

The Katas Raj Temples showcase the shared culture and heritage of a variety of groups. However, the distortion of the understanding of shared cultural monuments due to biases has caused a step back from the very river that links us. And I wonder, if we had abandoned the River Indus all those 5,000 years ago and focused on our individual differences, where would we be today? (710 words)

The writer is the A-Level student at International School Lahore