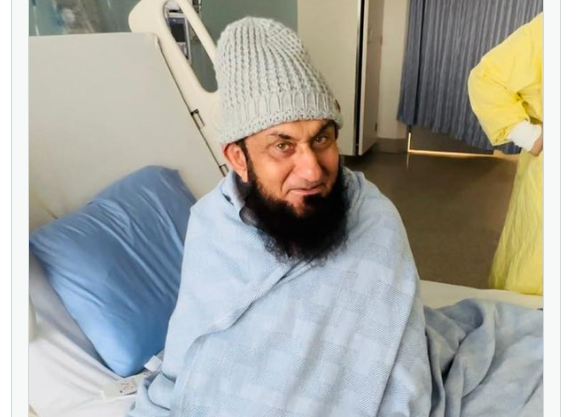 OTTAWA: Maulana Tariq Jamil, renowned religious scholar and preacher who suffered a cardiac arrest a day earlier in Canada, is “recovering” and will be “discharged from the hospital soon”.

The scholar is under treatment for his heart problem and shared an update about his improving health status.

A tweet from the preacher’s official Twitter handle, along with his smiling photograph, was shared in which he could be seen sitting on a hospital bed covering himself with a shawl and a woollen cap on his head.

“By the grace of Allah and prayers of you friends, [my] health is a little better now. Will be discharged after staying under the care of doctors in the hospital for three more days,” the tweet read, requesting for more prayers.

It was also learnt that Maulana received an angioplasty on Tuesday after suffering a heart attack during his stay in Canada, according to his family sources.

A day earlier, the scholar’s son Yousaf Jamil informed his followers on the microblogging networking site about his father’s condition and that he had been shifted to the hospital.

“He is feeling better now, Alhamdulillah!” Yousaf said, asking the followers to pray for his father’s health. “May Allah grant my father complete health.”

Maulana Tariq Jameel was in Canada to attend an event organised by IslamicRelief Canada which is an international charity.

Taking to Twitter, IslamicRelief Canada announced: “Unfortunately, today’s event with Molana Tariq Jamil has been postponed to December 28th due to Molana’s health.”

It further said that all the will be valid for Wednesday. “You may request a refund directly through Eventbrite if you are unable to attend,” the statement added.