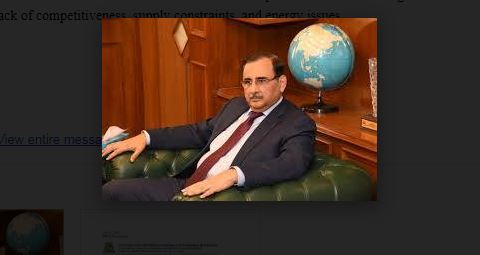 KARACHI, NOV 21 /DNA/ – The Federation of Pakistan Chambers of Commerce and Industry (FPCCI) has said the positive growth in large-scale manufacturing (LSM) will help achieve the annual economic growth target, besides creating jobs if the trend continues in coming months, as the LSM output has grown 7.65 percent in Sept, besides reporting growth of 4.8 percent in the first quarter of current fiscal year.

FPCCI President Mian Anjum Nisar, while addressing a delegation of various industrial sectors, who met him here in his office today, said that positive growth rate of the industry has given a ray of hope for the revival of economic activities in the country, fearing the data of Oct 2020 might be critical to sustain the momentum of industrial production during the second wave of pandemic in the country.

He said that in 2019-20, the LSM output had fallen alarmingly by 10.17 percent yearly. The industrial production after suffering months of damage inflicted by the corona pandemic mainly in the construction, sugar, automobile, and pharmaceutical sectors is now clearly reflecting a revival in economic activities in the country.

For the current fiscal year, the government had set the economic growth target at 2.1 percent, which will be better in the current economic situation but is not enough to create jobs for a growing population.

Mian Anjum Nisar said that remarkable decline in interest rates and reduction in duties on raw materials are expected to further spur economic activities in the current fiscal year, as manufacturing activity showed that more than half of the sub-sectors in the LSM rose in September.He said that the growth has now broken a cycle of constant contraction in past over one year. He said that large businesses had been bearing the brunt of very high interest rate, issues of the Federal Board of Revenue and high energy prices.

According to the data, large-scale manufacturing grew 4.8 percent in the first quarter of current fiscal year on the back of increased output in food, textile and mineral sectors. The LSM recorded 7.7 percent year-on-year growth in Sept, which kept hopes alive for a recovery after the large industrial sector contracted more than 10 percent in the previous fiscal year.

Data shows that out of 15 major industries, nine saw a surge in production while output of five industries showed contraction in the first quarter compared to the same period of previous fiscal year.

According to the data, 11 types of industries registered an average 0.2 percent growth in the first quarter of current fiscal year.

The manufacturing of chemical products increased almost 10 percent, paper and board almost 10 percent and rubber products nearly 8 percent. The pharmaceutical sector registered a growth rate of over 13 percent in the July-Sept period. The coke and petroleum sector output increased 2.7 percent. Industries that registered a dip in manufacturing included the automobile sector, which saw a contraction of 5.4 percent in the first quarter. Iron and steel production fell 8 percent, electronics 20 percent, leather products 45 percent, engineering products 37 percent and wood products 70 percent in the first quarter.

Sectors that posted growth on a quarterly basis included textile that grew over 2 percent and non-metallic mineral products increased 22 percent during the July-Sept period. But the output of power looms has declined 50 percent in the first quarter while fertilizer sector showed 2 percent growth whereas the food, beverages and tobacco group recorded 13 percent growth in the first quarter.

He said the government has already missed its annual export target for the first two years. For the current fiscal year, the export target was reset at $27.7 billion, requiring at least 6 percent growth.

He said the government has to formulate long-term and consistent policies for the revival of industry and considerable improvement in exports, as contrary to regional countries, Pakistan’s exports have remained stagnant during the past 40 years, and unless attention was paid to all factors that hamper industrial and exports growth, the country might not be able to achieve desired results. Some of the impediments to industrial growth include cost of production, poor governance, obsolete technology, lower productivity, lack of competitiveness, supply constraints, and energy issues. DNA