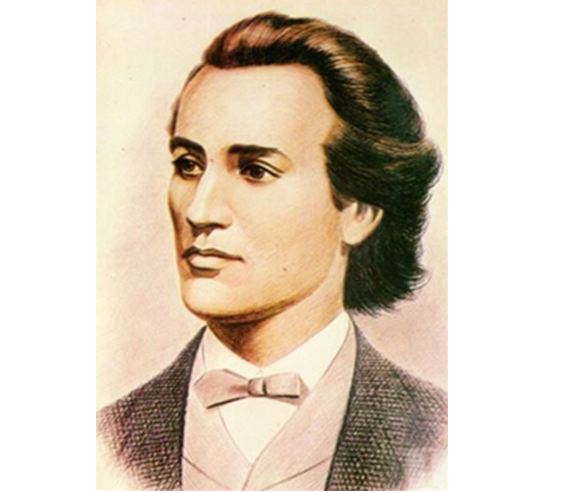 For Romanians, January 15 marks the celebration of the National Day of Culture, which also coincides with the commemoration of the country’s most famous poet, Mihai Eminescu(1850-1889). It is undeniable that to have an appreciation of Romanian culture one must become acquainted with the works of Mihai Eminescu. The leading cultural figure of nineteenth century Romania, Eminescu was not only a poet, but also a philosopher, prose writer, translator, and journalist.

Born on January 15, 1850, in Ipotești, a small village from north-eastern part of the country, Mihai Eminescu was the most prolific and talented poet of his generation – he published his first poem at 16 — and is seen by many critics and readers as the Romania’s national poet. He is considered to have changed both the form and the content of Romanian poetry, strongly influencing the following generations of poets. Moreover, one of the most famous Romanian historians, NicolaeIorga, described Eminescu as “the godfather of the modern Romanian languagein the same way that Shakespeare is seen to have directly influenced the English language.”

Eminescu started his education in Romania and after a few years in which he roamed the country with different theatre companies, working as a prompter and a copyist, he continued his studies in Berlin and Vienna, in Philosophy and Law.

During his university years, Mihai Eminescu became involved in the Romanian literary scene and was a frequent collaborator of various literary magazines and publications, being strongly influenced by the German philosophy and western literature. However, his most notable connection was with the Romanian literary society Junimea, founded in Iași in 1863, which is considered the most influential intellectual and political association of the 19th century, and which helped set up the basis of the modern Romanian culture.

After completing his education, he returned to Romania, having various jobs, from university librarian to journalist and editor-in-chief, while continuing to write and publish poetry, being perceived as one of the Europe’s most illustrious poets of his generation.Eminescu’s poems are often imbued with mythology and philosophy, from Heraclit and Platon to Schopenhauer, Kant and Hegel, but also with Asian philosophies. Eminescu’s prose is considered strongly influenced by German Romanticism, most notably Novalis, Goethe or Lenau. But probably the strongest influence on Eminescu’swork remains folklore and the spiritual ancestry of the Romanian people. He capitalised folkloric themes and motifs, giving them a new poetic dimension in poems like Luceafărul, Călin (File din poveste), Strigoii, Scrisoarea III, Doina, Revedere, while turning simple, peasant speech into poetic language,using archaisms and regionalisms and masterfully handling rhyme and verse.

Although he is most known for his poetry and prose, Eminescualso wrote numerous political articles and essays published in many important newspapers and political leaflets.Eminescu also dedicated his life and work for the independence of Romania and most of his notable political pieces belong to this period, when Romania was fighting the Ottoman Empire (1877-1878) and throughout the diplomatic efforts that eventually brought the international recognition of Romanian independence.