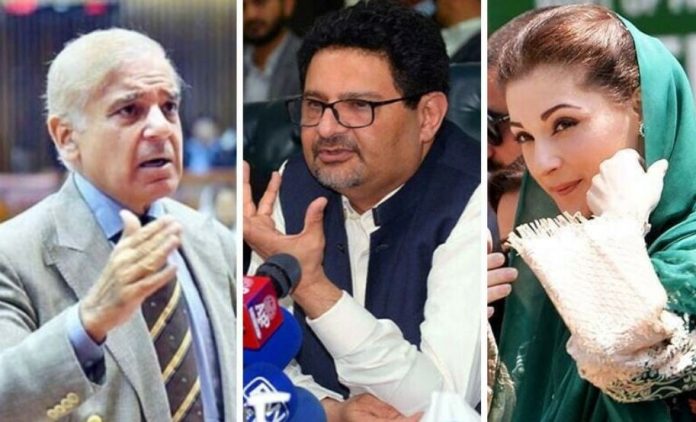 In a turn of events straight out of a spy movie, more purported audio clips featuring leaders of the ruling coalition surfaced on Sunday as the opposition PTI questioned the security of the Prime Minister’s Office (PMO).

Just a day earlier, an audio recording of an alleged conversation, purportedly between Prime Minister Shehbaz Sharif and a government official, was leaked on social media.

In the over two-minute-long audio clip, shared by PTI leader Fawad Chaudhry on his Twitter account, a voice — said to be that of PM Shehbaz — could be heard saying that Maryam Nawaz had asked him to facilitate her son-in-law Raheel with the import of machinery for a power plant, from India.

The clips which surfaced today, shared on Twitter by several PTI leaders, concerned embattled Finance Minister Miftah Ismail and the resignations of PTI lawmakers from the National Assembly.

The first clip purportedly features a conversation between PML-N Vice President Maryam and the premier about Miftah, who has reportedly faced criticism from within the party for taking tough economic measures.

The PML-N vice president has publicly stated that she does not agree with the decision to hike petrol and electricity prices, saying she did not own such decisions, whether her party was in government or not.

“He doesn’t take responsibility […] says strange things on TV which people make fun of him for […] he doesn’t know what he is doing,” the voice said to be Maryam’s says in the alleged clip.

“He clearly cut corners,” the voice said to be PM Shehbaz’s is heard as saying.

“Uncle, he doesn’t know what he is doing,” Maryam purportedly says, as she wishes for the return of PML-N stalwart Ishaq Dar.

Former finance minister Dar is set to return to the country next week to facilitate PM Shehbaz on the economic front.

A third clip purportedly features a conversation between Maryam and PM Shehbaz regarding the return of former army chief retired Gen Pervez Mushar­raf.

The former military ruler’s family publicly confirmed in June that he was “going through a difficult stage” where recovery was not possible while Inter-Services Pub­lic Relations (ISPR) Director Gen­eral Maj Gen Babar Iftik­har said Mushar­raf’s family was in contact with the military regarding his planned return.

Discussing this in the alleged clip, the voice alleged to be Maryam’s can be heard saying that she “sees this coming”, adding that she said the same to Nawaz in a phone call.

“I told him to tweet this. He listened to me immediately,” the PML-N vice president allegedly says, adding that the move was “opposed” by several people. She allegedly reasons that showing “magnanimity” in this situation would help the government save face.

Hours after Gen Iftik­har’s comments were aired in June, Nawaz had tweeted, saying: “I have no personal enmity or animosity towards Pervez Musharraf. I don’t want anyone else to suffer the trauma I have had to endure.”

While the government maintained its silence on the matter on Sunday, PTI leaders were in overdrive questioning the PMO’s security.

PTI’s Fawad said that the way the PMO data was offered up for sale on the dark web showed the state of the country’s cybersecurity.

“This is a failure of our intelligence agencies, especially the Intelligence Bureau (IB). Obviously, apart from political issues, important discussions on security and foreign issues are now in everyone’s hands,” he remarked.