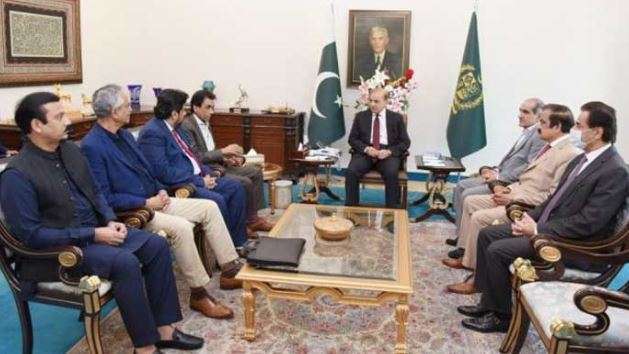 ISLAMABAD: Following MQM-P’s complaint regarding the PPP violating its agreement, Prime Minister Shehbaz Sharif Tuesday assured the party that their reservations will be addressed.

A delegation of the MQM-P — a key member of the ruling coalition — led by its convener Dr Khalid Maqbool Siddiqui met the premier at the PM Office. Other party members included Sindh Governor Kamran Tessori, Faisal Sabzwari, and Waseem Akhtar.

In the meeting with PM Shehbaz, the delegation protested against the PPP’s violation of its agreement with the party and complained that it wasn’t keeping its promises.

MQM-P sought the premier’s intervention in the matter while threatening to quit the coalition government if their grievances are not addressed.

“If nothing is done about it, there is no justification for them to stay in the government,” said the MQM-P leaders.

“It has become difficult to respond to our voters and the public,” the delegation told the PM.

Minister for Economic Affairs Sardar Ayaz Sadiq, Interior Minister Rana Sanaullah and Minister for Railways and Aviation Khawaja Saad Rafiq were also among the attendees of the meeting.

On October 15, following no progress on agreements with PPP, MQM-P started mulling to part ways with the coalition government including other options.

Sources told Geo News that MQM-P and PPP leadership had agreed on amendments to the local body’s bill during a meeting recently.

In addition, a review meeting was held on October 14 between the parties regarding the agreement but no further progress was made.

Amid delay in the implementation of the agreement, MQM-P has expressed concerns over “zero progress”, said the sources.

In August, MQM-P had also expressed concerns over the prolonged delay in the implementation of the agreement made with the MQM-P and urged Prime Minister Shehbaz Sharif to play his role in this critical situation.

On March 30, MQM-P announced parting ways with the PTI, joining hands with the then Opposition to support their no-confidence motion.

The MQM-P had made some demands before joining the coalition, which were agreed upon by the PPP.

There will be full implementation of urban and rural quotas for government jobs in Sindh.

Local-level police officers and personnel will be deployed.

MQM-P will be consulted on the appointment of the local body and administrative offices in urban areas.

PPP will consult MQM-P on major developmental projects in Sindh.

Both parties will join legislation to empower local bodies

Domiciles issued illegally in all districts of Sindh will be cancelled.