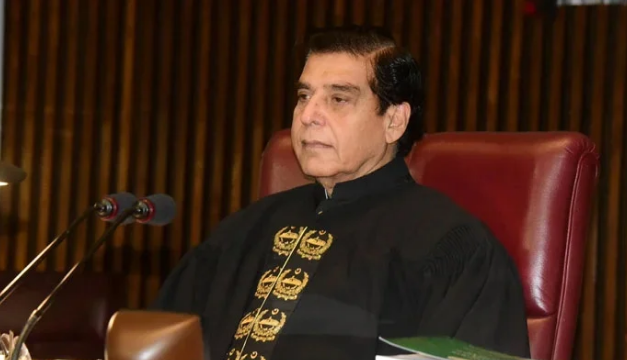 The PTI had resigned from the lower house of parliament after the ouster of PTI chief Imran Khan in April 2022.

According to a press release issued by the National Assembly Secretariat, the resignations were accepted in accordance with clause (1) of Article 64 of the Constitution and rules of procedure and conduct of Business in the NA.

The resignations had been accepted with effect from 11 April 2022, the date when the letters of respective resignations were submitted, said Radio Pakistan.

Following the approval of the resignations, the summary was sent to the Election Commission of Pakistan (ECP) to de-notify the PTI lawmakers.

Here’s the list of PTI lawmakers whose resignations have been accepted:

Earlier, Ashraf had stalled the process of accepting resignations after July 28 stating the remaining lawmakers would be summoned individually for verification.

However, contrary to his claims he quickened the process by accepting the resignations of 34 PTI MNAs and Awami Muslim League chief Sheikh Rashid earlier this week after an eight-month hiatus.

Soon after the PTI announced its return to the assembly and test the PM through a no-trust move, the government so far accepted 70 PTI resignations during the current week only.

Around 131 MNAs of the PTI had tendered their resignations en masse after Imran Khan’s government was ousted through a no-confidence motion in April last year.

By July 28, 2022, the NA speaker had accepted the resignations of only 11 PTI lawmakers.

Speaking to the media outside the Parliament House, senior PTI leaders said the speaker retracted from his old stance by accepting the resignations of 35 more PTI lawmakers today.

Former National Assembly Speaker Asad Qaiser condemned the decision and revealed that Ashraf had called the PTI leaders to the assembly and told them that the resignations would not be accepted unless he had a word with the MNAs himself separately.

“Were those whose resignations were accepted called by the Speaker?”Qaiser asked.

Berating the speaker’s decision, PTI Senior Vice President Fawad Chaudhry said now that 81 resignations were accepted, the government must also give a date for the general elections.

Expressing his displeasure over the decision, the PTI leader blamed Islamabad for the political and economic crises in the country.

“We are heading towards a Sri Lanka-like situation,” Chaudhry claimed.

“We decided to come to the meeting and he [the speaker] postponed it and when we came to the assembly, he accepted the resignations of 35 more MNAs,” said Qureshi, demanding that the rest of the resignations should also be accepted.

The party’s vice chairman said that the PTI wants snap polls so that the people can decide for themselves.