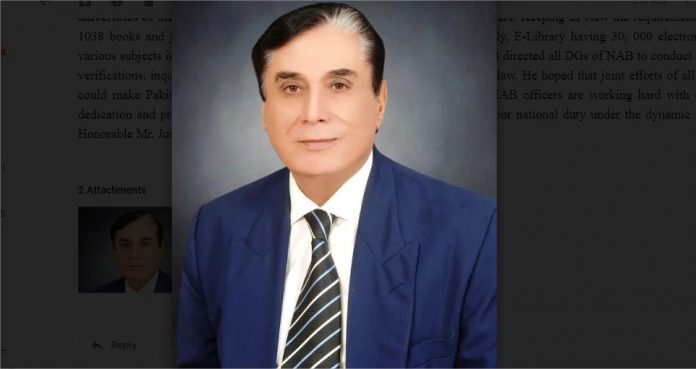 ISLAMABAD, JUNE 28 –  Justice (RETD) Javed Iqbal, Chairman NAB has said that NAB under its effective and comprehensive National Anti-Corruption Strategy is committed for logical conclusion of mega corruption white collar crimes cases by adopting “NAB’s Faith-Corruption free Pakistan” Policy as the figures of complaints in 2019 were much better as compared to the figures of complaints received in 2018.

He said that NAB has introduced a new concept of Combine Investigation Team (CIT) in order to benefit from the experience and collective wisdom of senior supervisory officers, a system of CIT comprising of Director, Additional Director, Investigation Officer and a Senior Legal Counsel has been put in place. This is not only lending quality to the work.

The accumulative success ratio of NAB is 68.8% in 2019 with 1983 successful disposal of cases.  NAB has established its state of the art Forensic Science Laboratory in NAB Rawalpindi. In 2019, 15747 questioned documents and 300 thumb impressions were analyzed in 50 cases and forensic analysis was carried out on 74 digital devices (Laptops, Mobile phones, Hard Disks etc).

NAB had filed 1219 corruption references in respected Accountability Courts which are under trial involving more than Rs. 900 billion.

The Honorable Justice Javed, Chairman NAB has said that absconders and proclaimed offenders would be arrested and taken to task as per law to recover looted money from them and will deposit in national exchequer. The Chairman NAB said that NAB is fully geared up to eradicate corruption.

He directed all Regional Bureaus of NAB to file applications in respected accountability courts for early expediting the under trial corruption references. He directed all prosecutors to pursue the cases with full preparations as per law on the basis of solid and incriminating evidence to conclude the corruption references to their logical conclusion. He said that NAB is the only institution in the world which has itself fixed timeframe of 10 months to conclude white collar crime cases besides.

It is important to note here that NAB has not only proved its performance with its actions not words impartiality and fairness as per law and started across the board actions against big fish. Today, reputed national and international organizations are lauding NAB’s efforts under the dynamic leadership of Honorable Justice Mr. Javed Iqbal, Chairman NAB for fulfilling his promise excellently without any discrimination and on merit and have restored the prestige of NAB by not caring about duress, browbeating of the corruption accused.

Chairman NAB not only reviews progress of NAB on regularly basis but also progress on all public complaints listened by Chairman NAB and all DGs of NAB at their respective regional bureaus related to corruption and corrupt practices on the last Thursday of every month. Due to this reason, as per survey of Gillani and Gallop, 59 percent people of Pakistan have shown their confidence upon NAB. He said that NAB has signed MOU with China to oversee CPEC projects being conducted in Pakistan. He said that youth is our future; NAB has signed MOU with Higher Education Commission in order to educate youth about the ill effects of corruption at an early age. More than 50 thousands Character Building Societies have been established in colleges and universities of the country. A Central Library is established at NAB Headquarters. Keeping in view the requirements of officers, 1038 books and journals etc. are available in the Central Library. Additionally, E-Library having 30, 000 electronic books on various subjects is also available for NAB officers/officials. The Chairman NAB directed all DGs of NAB to conduct all complaint verifications, inquiries and investigations on the basis of solid evidence as per law. He hoped that joint efforts of all stakeholders could make Pakistan corruption. This is NAB’s faith and for this purpose, NAB officers are working hard with commitment, dedication and professionalism with the aim that eradication of corruption is our national duty under the dynamic leadership of Honorable Mr. Justice Javed Iqbal, Chairman NAB.