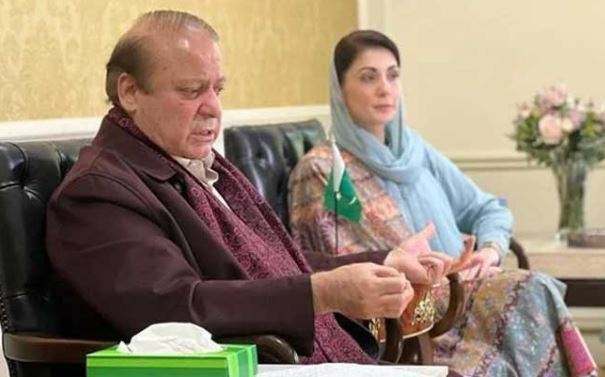 LONDON, OCT 9 – Pakistan Muslim League-Nawaz (PML-N) supremo and former prime minister Nawaz Sharif on Sunday said that the country has been dragged into a quagmire as a result of taking revenge against him.

The former prime minister was holding an important press conference flanked by PML-N Vice President Maryam Nawaz. Talking about his wife, Begum Kulsoom Nawaz, the PML-N supremo went on to say that fun was being made on her [Kulsoom Nawaz] illness. He added that this was the first time in a long time that she [Maryam] had met her brothers. “From the day, Maryam came to London, she has been talking to me and her brothers about Kulsoom Nawaz”, the former prime minister added.

Expressing his thoughts over the acquittal of the PML-N vice president [Maryam Nawaz] in the Avenfield case, the former premier [Nawaz Sharif] said that Maryam has made her way to London by bagging victory. While deeming the cases and sentences against him and Maryam as ‘fake’, the PML-N supremo [Nawaz] posed the question that if he [Nawaz] was wrong then why he faced everything and appeared before the court? Nawaz also said that his five years of life have been wasted.

“I was in jail and got the news that the National Accountability Court (NAB) wanted to arrest Maryam Nawaz. I don’t think that at time the people concerned with NAB had a feeling of sympathy for Maryam”, the PML-N supremo expressed his thoughts. The former prime minister further added that in front of him, his eldest daughter was crying and the youngest daughter went to the house while crying. Nawaz lashed out at the PTI Chairman and said, “I have never seen such things ever happen in Pakistan before. I want to inform Imran Khan that all of these events occurred during your [Imran’s] regime.”

Nawaz said, “I went to Maryam’s cell and informed them that Kulsoom had passed away. Soon after getting that news, Maryam started to cry.” The former prime minister [Nawaz] said that when Kulsoom was ill, nobody allowed him [Nawaz] to go and take care of his wife [Kulsoom Nawaz]. While hitting out at the PTI Chairman, Nawaz said that everything he [Imran] has done, is now being revealed in front of the masses.