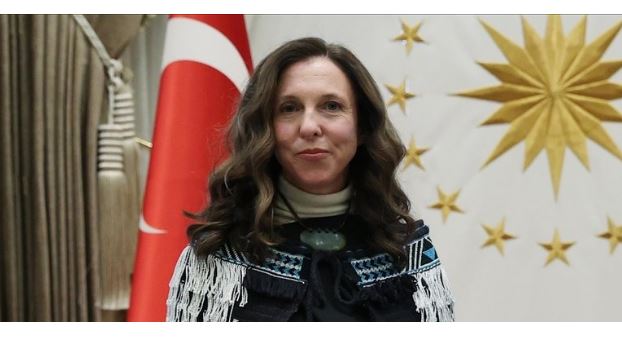 With a mandate to expand trade and economic interactions, New Zealand‘s new ambassador to Türkiye says she draws inspiration from “historical foundations” laid in Gallipoli to promote bilateral relations.

Zoe Coulson-Sinclair, who was assigned to the important Ankara mission late last year, has had quite busy start as New Zealand’s top diplomat in Türkiye since early this year.

Before flying to her new post, Coulson-Sinclair also visited the Turkish Embassy in Wellington at the latter’s invitation.

She succeeds Ambassador Wendy Hinton and is also designated as New Zealand’s ambassador to Jordan, Azerbaijan and Israel-an opportunity, she says, “would love to explore” as how to forge a closer partnership among the four nations.

In her maiden interview after taking up her new position in Türkiye, Coulson-Sinclair spoke to Anadolu Agency on the coast of Haliç (the Golden Horn) — a major urban waterway and the primary inlet of the Bosphorus in the Turkish metropolis of Istanbul.

Bringing along her experience from the Pacific, time spent in Europe, and from South and Southeast Asia, part of Coulson-Sinclair’s job has been “building regional models of working.”

“I know Türkiye has a very important role to play here regionally.

“So I hope that I’m going to be able to understand from Türkiye’s perspective how things in this region work and what dynamics are at play here,” she said, adding there is the possibility of sharing ideas on “how to promote regional stability in our respective parts of the world working together.”

Recalling the “strong historical foundations” built on the legacy of the Gallipoli campaign in the First World War, in which New Zealand troops took part, the ambassador said “my challenge is to work out how do we build off those strong foundations.”

On April 25, 1915, nine months into World War I, Allied soldiers landed on the shores of the Gallipoli (Gelibolu) Peninsula. The troops were there as part of a plan to open the Çanakkale Strait on Türkiye’s Aegean Sea coast to Allied fleets, allowing them to threaten the then-Ottoman capital, Istanbul.

The Allied forces, however, encountered strong and courageous resistance from the Turks and the campaign turned out to be a costly failure. Tens of thousands of Turkish nationals and soldiers died along with tens of thousands of Europeans, plus 7,000-8,000 Australians and nearly 3,000 New Zealanders.

Victory against the Allied forces boosted the morale of the Turkish side, which went on to wage a war of independence between 1919 and 1922 and eventually formed a republic in 1923 from the ashes of the old empire.

“And it might be hard for people here (in Türkiye) to understand that every kid at school hears about Gallipoli and the Anzacs,” she said, referring to the Australian and New Zealand Army Corps.

April 25 is also known as Anzac Day in New Zealand and Australia — a significant national holiday that honors the Australian and New Zealand forces who fought and died in Çanakkale on Türkiye’s western coast in 1915. Australia and New Zealand commemorate the event at Gallipoli.

“Türkiye plays a part in the forming of New Zealand’s very own unique identity because much of that started here on the beaches of Gallipoli,” Coulson-Sinclair emphasized.

“Linked to that, of course, were the bonds we forged with Australia when we created the Australian and New Zealand Army Corps that also happened here,” she added.

Every year, New Zealanders and Australians travel thousands of kilometers to visit Gallipoli and pay tribute to their fallen soldiers.

Coulson-Sinclair said her focus is to “take this relationship (with Türkiye) to new heights and into new areas.”

Looking at the opportunities that Türkiye offers, Coulson-Sinclair said her challenge would be to pick the priority areas.

“If anything, the greatest challenge for me will be working out where to prioritize, because even in my first three months here, I have seen such a vast array of opportunities, be it in sharing regional understanding, working together in the multilateral space, seeing that Türkiye is now looking to expand, have a space program and work in Antarctica, both things that New Zealand in the past few years has done as well,” she said.

While the world is slowly coming out of the COVID-19 pandemic, she said New Zealand is “once again open for business.”

The Working Holiday scheme with Türkiye will be open for applications from July 21, she said, adding the people-to-people links present a “whole load of new opportunities.”

“But in terms of commercial and trading opportunities, there are some really interesting things that are already happening here…many of which are of mutual benefit to both countries,” she said.

The ambassador said engineering and construction projects in New Zealand are “being worked on by Turkish companies.”

“And at this end, we have New Zealand companies establishing factories here (in Türkiye) to produce industrial products,” she added.

“So there are lots of partnerships already happening. And I’m here to see how I can get behind them (businesses) and grow them further.”

On her role as New Zealand’s ambassador-designate to Jordan, Azerbaijan and Israel in addition to Türkiye, Coulson-Sinclair said: “This region is very closely integrated. We are an isolated island and don’t have the same experience and understanding what it means to have to work with neighbors that are right on our borders.”

“We are all important players in the multilateral space. I think there’s a lot we can do there to share our positions, share our lessons and work together in that in those international forums,” she added.

She also said that Ankara and Wellington can “work together to find global solutions for global problems.”

“And climate change, of course, is the biggest one of them all.”

New Zealand, she said, “is blessed with rates of hydropower that other countries can envy.”

“That doesn’t mean that any of us should rest on our laurels.”

She, however, said her country’s biggest challenge “is around methane emissions from agriculture.”

“But we are looking to find solutions to this through some new agro-technology. And I think this is the kind of area where we can share what we’re learning, find out what research is being done here and ensure that we are all equipped with the best know-how to tackle these issues.”

Coulson-Sinclair was cautious over whether New Zealand could suggest to other nations “how it dealt with” the Christchurch attack of March 2019, arguing whether such a particular issue “would be relevant in any other country.”

“What other countries responded well to was that our Prime Minister (Jacinda) Ardern responded authentically and from the heart,” she said.

Brenton Tarrant, an Australian white supremacist, killed 51 people and injured 40 others at the Al Noor Mosque and Linwood Islamic Centre on March 15, 2019.

He was sentenced to life in prison in August 2020 without the possibility of parole, in the first such ruling ever handed down in the island country.

“Prime Minister Ardern was as shocked and horrified and upset as anybody else was and she did just what came naturally to her, which was to express her sympathy and her solidarity with the people, with the victims and the families of the victims and the communities that were impacted,” said Coulson-Sinclair.

The ambassador said her country has implemented a number of recommendations since 2019 “to ensure that this doesn’t happen again.”

Coulson-Sinclair said the Ardern government was aiming “to look at how we can ensure that ours is a more inclusive, more tolerant society.”

“That is how we see this, that it’s important that we stamp out any kind of discrimination based on any faith, and if there are lessons in that for others to learn, we are always very happy to share them,” she said, adding “the solidarity shown by Türkiye was of course welcomed.”

“We were glad to see that countries stood behind us, beside us in responding to what was a terrible crisis and one that we just don’t ever want to see again,” she said.

Türkiye’s Vice President Fuat Oktay and Foreign Minister Mevlüt Çavuşoğlu flew to New Zealand soon after the incident to extend support to the people and government of New Zealand.

On the return of Ardern with a strong mandate during New Zealand’s general elections amid the coronavirus pandemic in 2020, Coulson-Sinclair said the prime minister and her government enjoyed widespread support.

“Because it was shown that their response to COVID-19, which put people and their health at heart, not only did that improve the health and wellbeing, the health outcomes for New Zealanders, but also the economy benefited from it as well. And as a result, people who had traditionally voted for different parties said this government deserves a second go,” she said.

She said the current COVID-19 statistics “bear this out for the first two years of the pandemic, New Zealand had the lowest rates of hospitalization and deaths (among the countries) in the OECD (Organization for Economic Cooperation and Development).”

“But it has been a very difficult time for any leader anywhere in the world,” she acknowledged.

Foreign Minister Mahuta is the first indigenous female top diplomat of her country.

“It makes me very proud that we have a foreign minister who appropriately reflects New Zealand, contemporary Aotearoa, New Zealand, which is a bicultural country, and it’s beholden on me to do my best as well to accurately and authentically represent the country that has sent me here,” said Coulson-Sinclair. “So I do my best.”