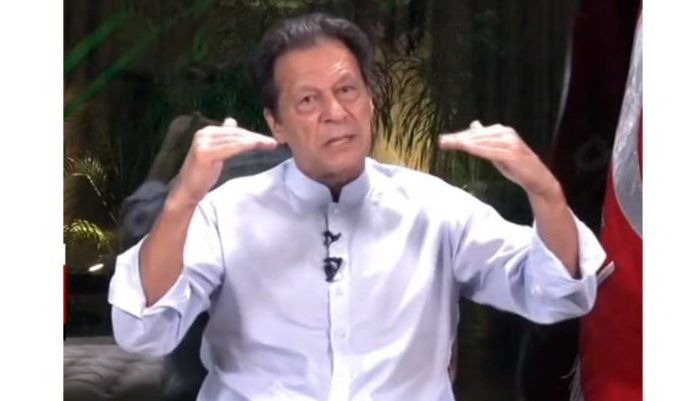 GUJRAT, NOV 11 (DNA) — Pakistan Tehreek-e-Insaf Chairman and former Prime Minister Imran Khan has said that the absence of rule of law is the main root cause of all problems being faced by Pakistan.

Addressing PTI long march rallies in Gujrat and Kamalia through video link, he said the appointment of the next chief of army staff (COAS) must be made according to merit.

However, he said that those in power had not done anything on merit and questioned if they would rightfully select the army chief on merit. “They want their own army chief because they want to steal.”

PTI Chairman Imran Khan lashed out at PML-N supremo Nawaz Sharif and premier Shehbaz Sharif. “The one [Nawaz] who looted country for the 30 years will make decisions about army chief’s appointment, elections date and caretaker setup,” he said.

“No one can even imagine that this can happen in a civilised society because rule of law prevails there.” “Shehbaz Sharif had met his older brother “lying absconder” Nawaz Sharif in London to discuss the appointment of the next army chief.

Will a man wanted by the Pakistani courts and a prime minister who is involved in a money laundering case be allowed to select a general for the country, he said? He feared that Mian Nawaz Sharif would suggest a person who would later help him in settling his cases.

He added that PM Shehbaz was brought into power through a conspiracy.  He added that Nawaz Sharif has never made any appointment on merit. The ECP Chief is their servant, they do whatever they want using him, he added.

PTI chief Imran Khan also called on the nation to participate in the party’s long march for future generations. He said that nations seldom had the chance to change their fate but said that now was the time for Pakistan.

Imran Khan alleged that the “thieves” had come into power because of their “handlers”. “There is murder of morality in this country,” he said, adding that such things don’t occur in civilized countries.

“These thieves have only one other achievement apart from their corruption, they managed to slowly finish their cases,” he said, adding that they had wreaked havoc in the country. He went on to say that a country is unable to prosper when it forgets its morals.

He stated that this scenario could never occur in any civilized country as rule of law prevails. He lamented that the corrupt were not facing the consequences as there was no rule of law in Pakistan.

“I can’t get a first information report registered as an ex-prime minister because a powerful person is in it,” he said.  He added that he strived for two years for EVMs, which could eradicate 90% of rigging in polls but they ended the project because they want to rig elections.

The former PM while raising question on presence of pictures of slain journalist Arshad Sharif said that his mother is not being provided the postmortem report despite repeated demands.

“I knew the plan. The plot was prepared in September,” Khan told his supporters, without presenting any evidence for his claims. “The march will just get strengthened after this incident.”

Khan has described the shooting as an “assassination attempt” and blamed Prime Minister Shehbaz Sharif and Interior Minister Rana Sanaullah for being behind the attack.

Khan was ousted in April in a no-confidence vote in Parliament, but he says his removal was unlawful and a conspiracy by his political opponents orchestrated by the United States, a charge denied by both Washington and Sharif.

Khan’s protest convoy started from Lahore two weeks ago with Khan and thousands of his supporters – in trucks, cars or on foot – marching toward Islamabad for what was to be an open-ended rally until his demands were met.