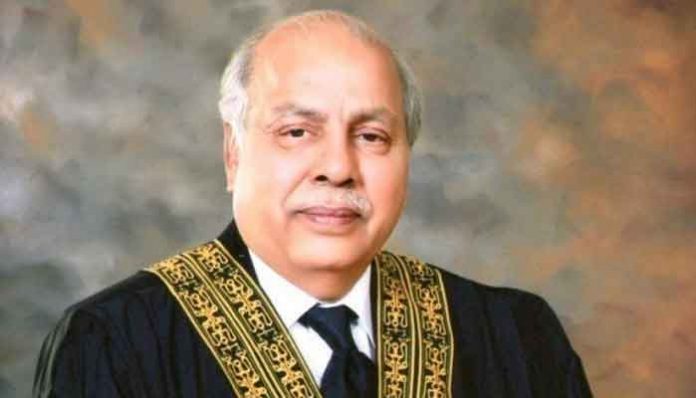 Chief Justice of Pakistan (CJP) Gulzar Ahmad has taken a strict view on the release of prisoners amidst the coronavirus outbreak, stating that whatever measures are taken in Pakistan in this regard will be taken according to the law.

The CJP made these remarks while hearing a petition against the release of under-trial prisoners on the orders of high courts.

The CJP is chairing a five-member larger bench of the Supreme Court that is hearing arguments on the matter.

“Under what law can suspects and accused be released?” the CJP asked while hearing arguments. He noted that it was already very difficult to arrest the accused in cases.

“The police are already busy with the coronavirus emergency. How can we let criminals be out on the roads as well?” he asked. He said robberies have already started taking place in Karachi soon after the release of prisoners.

“Karachi’s Defence area is under the control of robbers,” the top judge said. “Thieves are emptying houses under the pretext of checking for coronavirus patients,” remarked the top judge, recounting an incident.

“Ever since the [Sindh] high court has issued bail [for prisoners], crimes have increased,” the judge stated.

He added that any decision to release prisoners should be taken after looking at the facts on the ground.

The judge remarked that due to the coronavirus, the businesses of the corrupt have also been affected. He noted that those accused of corruption have also been released by the courts.

To this, the attorney general interjected to say he would not like to comment on the problems in Sindh.

However, the CJP persisted, saying that if the corrupt do not get a chance to do their corruption, they too will start resorting to crime.

“Coronavirus will not go away by emptying the jails. The law is present for taking care of prisoners,” remarked Justice Qazi Faez Isa.

Justice Sajjad Ali Shah added that the law says that prisoners affected by COVID-19 should be kept under quarantine.

“If the virus spreads in jails, the Supreme Court will be held responsible,” the attorney general warned the court.

The CJP, however, brushed aside the warning, telling the attorney general that the court is concerned with the law, not with the allegations hurled at it.

President of the Supreme Court Bar Association Qalb-e-Hasan, who was representing those who have supported the decision to release prisoners, argued that a team of doctors has yet to visit jails.

He also reminded the court that the jails can keep 57,742 prisoners in total, but are housing 77,275 instead.

“Only 25,456 prisoners are convicted, while there are more than 48,000 who are still under trial,” noted the SCBA president.

He further pointed out that 90 newborn babies are also in jail with their mothers.

The lawyer said that after God, the courts are the only hope for the helpless. He complained that the government has not done anything yet for the people languishing in jails.

“I urge the court to defend the rights of prisoners,” Hasan pleaded.

The AGP once again warned the court that if coronavirus spreads in the jails, no one will say the government failed to do something.

“The people will say that the Supreme Court did not allow the release of under-trial prisoners,” he added.

However, the CJP once again dismissed the concern, saying he did not care about such stuff and that the court has to consider the law.

The attorney general then recommended that the court at least release those prisoners who are under trial for minor crimes.

He, however, conceded that those prisoners who are under trial for corruption and dealing in narcotics should not be released.

“Those under-trial for violence against women and children should also not be released,” the AG argued, while also advising against the release of any who have had a criminal record.

“Prisoners do not have a home, so why do they [the government] want to kick them out on the streets?” the CJP wondered.

To this, the AGP appealed to the court to issue a “uniform guideline” in case of the release of prisoners.

Before wrapping up the day’s proceedings, the apex court sought details by April 6 from federal and provincial authorities about the number of inmates and the capacity in jails.

The judges also asked officials to inform the court about the exact number of accused and convicts currently incarcerated in jails across the country.

Arguments on the legality of prisoners’ release will take place on the next hearing.

The bench has also directed that it be provided a list of female prisoners and those who are above 60.

It should meanwhile be ensured that no one affected by the novel coronavirus enters into a prison, the court has ordered.

The Supreme Court had on Monday suspended various orders issued by the high courts relating to the release of under-trial prisoners amidst the coronavirus outbreak in the country.

In its order, the top court said: “No further order shall be passed by any of the high courts and by any of the provincial governments/ICT/Gilgit-Baltistan of releasing the prisoners from the jails.”

It added that if any order has been passed regarding the release of the prisoners and not given effect or implemented till now, the same shall not be acted upon until further orders by the Supreme Court.

The apex court further suspended the implementation of the Islamabad High Court’s orders regarding the release of under-trial prisoners.