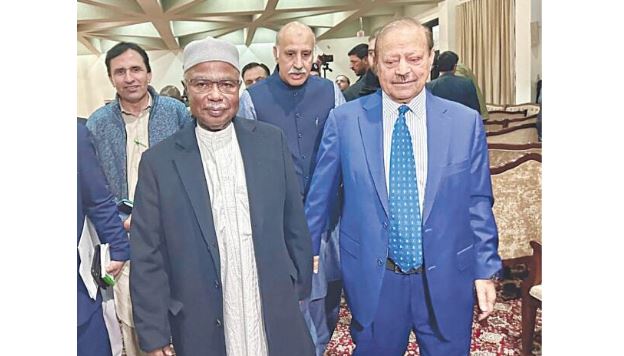 MUZAFFARABAD: The Organisation of Islamic Cooperation (OIC) has said it has been working on a plan to find a channel of discussion between Pakistan and India in its earnest endeavours to see a solution to the longstanding Kashmir issue.

“I think the most important thing is to find the channel of discussion between stakeholders [India and Pakistan] and we are working on a plan of action in this regard in collaboration with Pakistani government and other member countries,” said OIC Secretary General Hissein Brahim Taha at a brief media talk at President’s House on Sunday.

“That’s why we need the mandate of member states and we should know that most of the issues in diplomacy should not be [discussed] on the street,” he added.

Mr Taha told the media that he had undertaken the tour to implement a resolution adopted by the Council of Foreign Ministers (CFM) at a recent session, as he wanted to see for himself the situation on the ground.

“We are here to express our solidarity, sympathy and determination of the OIC to find out a solution for this longest conflict between India and Pakistan [in collaboration] with our partners, with the international community and with our member states.”

He said Kashmir is part of OIC which has collective and individual responsibility to talk about this issue to find a solution.

Asked why some OIC member states were going “an extra mile” in expressing their “appreciation and fondness” for India despite the latter’s perpetual denial of right to self-determination to the Kashmiris, perpetration of war crimes in the occupied territory and state-sponsored persecution of Indian Muslims, he hinted at the limitations of the forum. “I just want to emphasise that in OIC we are working on the basis of the resolutions that were adopted by the member states. But all states have their own sovereignty even though we are [from] the same community,” he said.

About the OIC delegation’s visit to the Line of Control, he said he would submit a comprehensive report to the CFM in the backdrop of the visit and ask them to “take the right decision. Basically, the decision will be taken by the foreign ministers”.

The AJK president, in his introductory remarks, said Kashmir was not a territorial dispute rather an issue of the future of a nation. He appreciated the OIC secretary general for his all-out support to the right to self-determination of people of India-held Kashmir.

Earlier, the delegation, accompanied by Mr Kaira, drove to Chakothi sector, where it was briefed by a military commander on the LoC situation. The delegation visited the Martyrs’ Monument in Cha­ttar, where Mr Taha also laid a floral wreath. They also interacted with a group of victims whose families had faced deaths and destruction due to ceasefire violations.