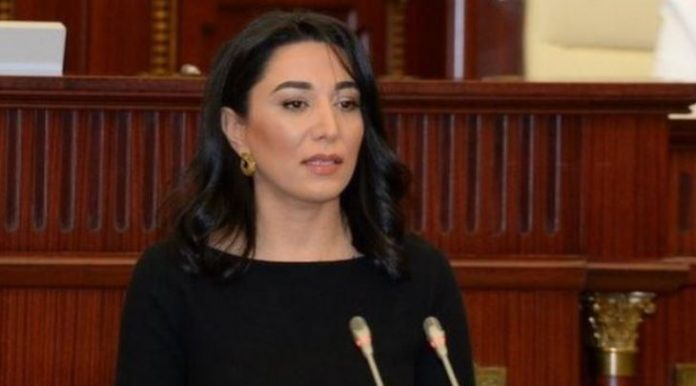 BAKU, OCT 19 – The Commissioner for Human Rights (Ombudsman) Sabina Aliyeva issued an appeal in connection with the intentional intense shelling of the city cemetery in Terter by the Armenian armed forces, on Sunday with reference to the Office of the Ombudsman.

We, with sense of sorrow, are proclaiming that Armenian armed forces, since September 27, 2020, have been continuing to intensively launch fire using heavy artillery and special rocket systems on densely populated civilian settlements, social, cultural and strategic facilities, historical, cultural, religious buildings of Azerbaijan and even the cemeteries that are touching moral values of the people.

The Armenian side, in violation of the agreed humanitarian ceasefire declared from October 10, 2020, have continued to deliberately fire at the densely populated settlements of Azerbaijan. Subsequently, 4 civilians were killed and 4 were wounded due to the Armenian armed forces’ intentional attack on the city cemetery during a funeral in Tartar district at early hours in the morning of October 15, 2020, in flagrant violation of general norms and principles of 1949 Geneva Conventions, which is a particularly barbaric act and a crime against humanity.

The regular shelling of civilian settlements and holy places by the Armenian armed forces proves once again that Armenia, a mono-ethnic state, took the fascism as an ideology and is intolerant of people of other nationalities and faiths. Unlike an aggressor Armenia, Azerbaijan is a multiethnic, tolerant, and multicultural state, where different people of various religious backgrounds co-exist at friendly and brotherhood environment. Azerbaijan as an independent state with democratic principles creates equal opportunities for all peoples living on its territory, irrespective of their religion, language, race, etc. grounds. Azerbaijan as a meeting point of various civilizations, for centuries, was recognized as a place of national and cultural diversity, where people of different ethnicities and confessions have been living at the environment of peace, tranquility, mutual understanding and dialogue. Only in Baku, there are over twenty associations and cultural centers of the Russians, Ukrainians, Kurdish, Laks, Lesgins, Slavs, Tats, Tatars, Georgians, Ingiloys, Talishs, Avars, Meskhetian Turks, Europeans and Mountain Jews, Georgian Jews and Germans. Along with mosques, in the capital city, there are also Catholic and Orthodox churches, Jewish synagogues as places of worship for believers. In Azerbaijan, there have been developed a special model of interreligious dialogue that is a good practice for many polyethnic regions of the world. Today, in numerous higher educational facilities of the world is taught a course on “Azerbaijani model of multiculturalism”.

Representatives of various religious communities in our country also appealed to the world community and religious leaders to protest against the constant shelling of densely populated civilian settlements in Azerbaijan, as well as against the terror act as killing of civilians during the funeral in the city cemetery in Tartar by the Armenian Army.

We would like to emphasize that the Government of Armenia and its diaspora are biased and systematically trying to present the Nagorno Karabakh conflict and Armenia’s military aggression against Azerbaijan as a religious confrontation and by doing so, it deliberately seeks to disguise the fact of occupation, approved by four UN Security Council Resolutions and to create the impression of a religious confrontation among uninformed individuals. Such propaganda about our country, which is included in the list of the most religiously tolerant countries and recognized as a country without anti-Semitism and religious discrimination in all relevant rankings, is, of course, regrettable and surprising. In this regard, it is worth only noting that Pope Francis visited our capital in 2016, which was declared the year of multiculturalism in the country, and officially stated at the Meeting with the President that religious freedom is guaranteed in our country. Azerbaijan has also restored the catacombs of St. Marcelino and Pietro in the Vatican. According to the international opinion, Azerbaijan is an exemplary, secular state, where the right to tolerance and freedom of conscience is guaranteed and the first secular democratic republic was established in the Muslim East. From this point of view, the propaganda that the Armenian side is trying to exaggerate the religious factor is unfounded and is clearly doomed to destruction.

We, once again urge the world community, religious leaders and international organizations to demand on the occupant Armenia to refrain unconditionally from criminal acts against civilian population of Azerbaijan that is a blatant violation of fundamental human rights and freedoms, causing to casualties and disrespect for material, spiritual and religious values, to liberate Nagorno Karabakh and adjacent districts, which are historical and internationally recognized territories of Azerbaijan and to take urgent steps to establish international legal responsibility against this country.