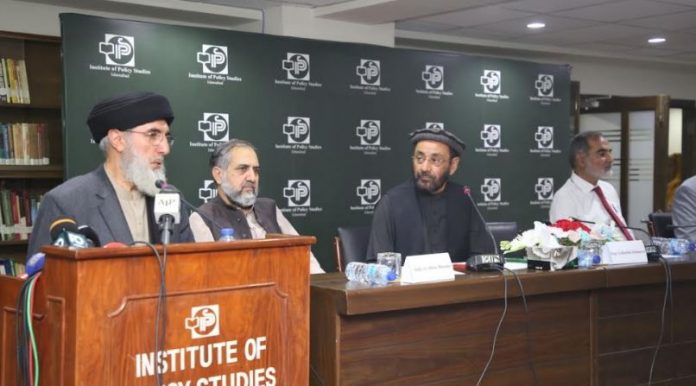 ISLAMABAD, OCT 21  – The only durable solution for peace in Afghanistan is that the US should withdraw its troops and a non-aligned, independent and sovereign government should be formed by Afghans in light of their beliefs and traditions without any interference; otherwise the country would slither into another civil war, warned veteran Afghan politician and Hizb-e-Islami’s supreme leader Eng. Gulbuddin Hekmatyar.He was addressing a large number of foreign policy analysts, practitioners and journalists at his exclusive talk organized by Institute of Policy Studies, Islamabad, at the conclusion of his three-day official visit to Pakistan on the invitation of the Ministry of Foreign Affairs here on Wednesday.

The forum was chaired by Executive President IPS Khalid Rahman and moderated by Ambassador (r) Syed Abrar Hussain. Pakistan’s special envoy for Afghanistan Ambassador (r) Muhammad Sadiq was also present on the occasion.Hekmatyar said Afghans invested about $20 billion in other countries including Turkey and the Gulf states during the war. He suggested that Pakistan should facilitate Afghan investors and businessmen thus enabling them to bring their investment to Pakistan. The facilities he termed essential in this regard include permission to open bank accounts, buy property on the basis of Afghan passports and long-term visas like those provided by certain European countries.

The Afghan leader, who met the top-level leadership during his three-day visit to Pakistan, said he had held talks with Pakistani officials in this regard and was hopeful that it would be implemented soon.Hekmatyar, who has twice served as Afghan prime minister in the 1990s, said it was the requirement of justice that those who have sacrificed for Afghanistan for so many years should have the right to govern the country now.Afghan groups should have the opportunity to enter into negotiations with each other at a neutral venue. The discussion agenda would be withdrawal of the US from Afghanistan and an independent sovereign government.

The other national issues such as constitution and type of government should be left for later after peace is restored. These are national issues and no external forces have the right to decide about these matters, he said.He said the US has been defeated in Afghanistan without achieving any goals and considers the corrupt and incompetent Kabul government the main reason for its failure. It will be a mistake if the US now adopts another policy other than leaving Afghanistan, he added.Hekmatyar said unfortunately some countries think a gap will be created once the US leaves Afghanistan which they will be able to fill.

He hoped the Americans will not repeat the deadly mistake of the Soviets who established their puppet government in Kabul before leaving Afghanistan.He warned rival countries against transferring their hostilities to Afghan soil. Afghanistan should not be used by the US against Russia, by India against Pakistan, and by Iran against Saudi Arabia, etc, he added.He said India and Iran are also supporting Ashraf Ghani’s government, which is surprising as it is weak. The continuation of war in Afghanistan is not in anyone’s favor, including India.

The reason behind India’s support of the current Afghan government could be Kashmir, he said, adding that India must not transfer their Kashmir war to Afghanistan.Hekmatyar said his group supports the US-Taliban agreement although they have their own observations and reservations about the process and also want to be part of the negotiations. However, it contains the vital point that the US will leave Afghanistan, though its timeframe could have been reduced. He said the majority of political parties are not supporting the Afghan government’s stand on the peace process.

The current government in Kabul is not ready to enter into negotiations with all political parties.Hekmatyar said negotiations will start between Hizb-e-Islami and Taliban with the aim to make the peace durable and lasting. Peace is not achievable without bringing every stakeholder on board.He said Pakistan helped the US in Afghanistan but the Americans still preferred India over Pakistan. This is because superpowers have their own designs and they do things as per their own interests.Hekmatyar said his visit to Pakistan comes at a time when the Afghan peace negotiation process is at a critical stage. His impression was that Pakistan is keen for an Afghan-owned peace process in Afghanistan. He said the Pakistani officials have assured that all mutual problems will be solved gradually through mutual understanding.

He was realistic that the peace process would not have been possible without the support of Pakistan.Earlier Khalid Rahman, in his introductory speech, said that Gulbuddin was one the first leaders to offer resistance to the Soviets in the 1980s. He played a very important role in Afghanistan ranging from the battlefield to politics. He stressed that those who wish to see peace in Afghanistan must come together, terming it a healthy sign that Pakistan and Afghan leaders are beginning to engage in productive talks.

Galatasaray in talks to sign Turkish forward on loan

Islamabad : Interior Minister Sheikh Rashid Ahmad has categorically said that the government is neither going to recognize Israel nor it will...
Read more

Multan : Foreign Minister Shah Mahmood Qureshi has expressed the hope that Pakistan’s relations with the new US administration will flourish in...
Read more

Islamabad : Interior Minister Sheikh Rashid Ahmad has categorically said that the government is neither going to recognize Israel nor it will...
Read more

Multan : Foreign Minister Shah Mahmood Qureshi has expressed the hope that Pakistan’s relations with the new US administration will flourish in...
Read more