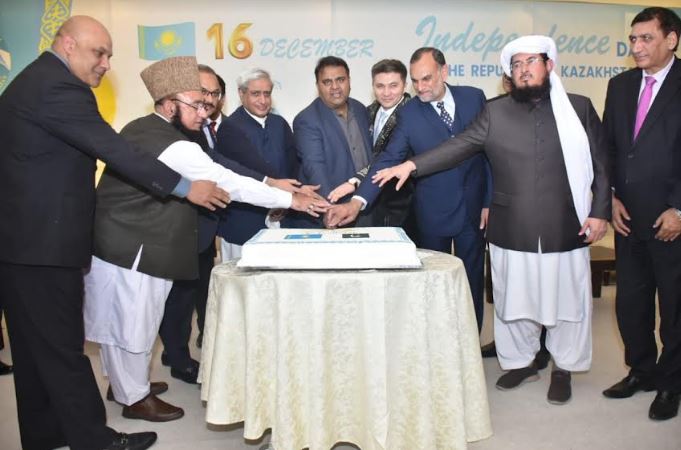 ISLAMABAD, Minister for Information and Broadcasting Chaudhry Fawad Hussain Wednesday said Pakistan and Kazakhstan were needed to work closely at different fora to ensure peace and stability in the world especially within the region.

Addressing a ceremony held here in connection with the national day of Kazakhstan, he said the world including Kazakhstan must come forward to help mitigate the sufferings of Afghan people on humanitarian basis. Peace and stability in Afghanistan was vital for the entire region including Pakistan, he added.

Fawad, on behalf of the Pakistanis, also felicitated the leadership and people of Kazakhstan on their national day.

Pakistan and Kazakhstan ties were anchored in the shared religious and cultural values and had the potential to become important trade partners due to their strong diplomatic, historical, religious and political ties, he noted.

The minister said his country was committed to promote an inclusive coordination with the Central Asian countries under its ‘Vision Central Asia Policy’.

Kazakhstan was an important country of the Asia, he said while stressing the need for boosting bilateral cooperation in industrial and agriculture sectors by both the countries whose economies were mainly based on those sectors.

The two countries were needed to work together in the areas of politics, trade, investment, energy, bilateral relations, security and culture, the minister maintained and called for promoting bilateral cooperation among their private sectors.

“We want to expand the railway and road network with the Central Asian States,” Fawad stressed and said both the countries had important place in the region due to their geographical importance and the Silk Route.

He said Islamabad had gained unique status in the world as about 65 per cent of world population was just three hours away from the federal capital of Pakistan.

He said there had been vast trade opportunities in Pakistan especially in the fields of energy, agriculture, information technology, communications, construction and railways.

: Ambassador of Kazakhstan Yerzhan Kistafin has said his country greatly values ties with Pakistan and is looking forward to diversifying these relations. He expressed these views on the occasion of the 30th Anniversary of the Independence of Kazakhstan.

The Ambassador further said Kazakhstan is the biggest economy in Central Asia and our strategic goal is to secure leading positions in the region and strengthen our niche in the world economy.