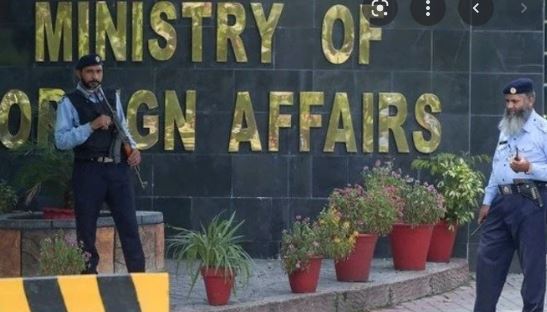 It is regrettable that India chose to misuse an important Committee of the United Nations Security Council (UNSC) to mislead the international community about Pakistan’s role in countering global terrorism. India’s shenanigans undermine the purposes and mandate of the Committee and are reprehensible.

Contrary to Indian claims, it is India that has remained non-cooperative with Pakistan and has deliberately held back judicial proceedings of the Mumbai attack case. The Indian government should be held accountable for attempting to unjustifiably prolong the legal proceedings of the Mumbai case by employing a range of dilatory tactics. India’s malfeasant intervention in today’s CTC meeting in Mumbai yet again corroborates Pakistan’s long-standing concerns that India is only interested in politicizing international counter terrorism forums to malign Pakistan. India must remember that Mumbai attacks case is in the court of law and rather than relying on anyone’s whims or wishes, it would require irrefutable and legally tenable evidence for efficient disposal.

Pakistan’s role in the global fight against terrorism is acknowledged by the international community despite India’s utmost efforts to cast aspersions on Pakistan’s intent and efforts. India, conversely, has been involved in supporting terrorism against Pakistan using its own soil and territories of other countries. Indian spy Kulbhushan Jadhav, caught red-handed in Pakistan is a living proof of Indian state involvement in sabotage and terror activities inside Pakistan. Indian collaboration with TTP and other international terrorist organizations are also well known.

India’s hypocrisy is also evident from its state-sponsored terrorism in Indian Illegally Occupied Jammu & Kashmir (IIOJK), where 900,000 Indian security personnel continue to terrorize, torture and torment innocent Kashmiris with impunity. At the same time, the world is well aware of the “saffron terror” orchestrated and unleashed by the BJP-RSS zealots against Muslims and other minorities in India.

Pakistan’s recent delisting by FATF is a clear recognition of its credible, robust and irreversible counter financing of terrorism actions. Quite predictably, having failed in its attempts to thwart Pakistan’s success at FATF, India is now attempting to use other international forums to achieve its vile designs against Pakistan, and misleading international community. The politicization of FATF by India and its irresponsible behaviour at the forum are widely known at international level.

Pakistan calls upon the international community to hold India accountable for its patronage of terrorist entities and for supporting, financing and abetting terrorism in neighbouring countries. More importantly, rather than leveling baseless allegations  against Pakistan, India would be well advised to abjure its policy of state terrorism in IIOJK, and against Muslims and other minorities in India,  and allow the subjugated Kashmiri people to exercise their right to self-determination as enshrined in the relevant UN Security Council resolutions.

Pakistan also urges the United Nations and members of the Security Council to remain wary of India’s propensity to engage in baseless and misleading propaganda and its blatant attempts to hijack serious international platforms in order to fulfill its own nefarious agenda. The international community also has an abiding responsibility to ensure justice for over 90,000 victims of state terrorism in IIOJK.