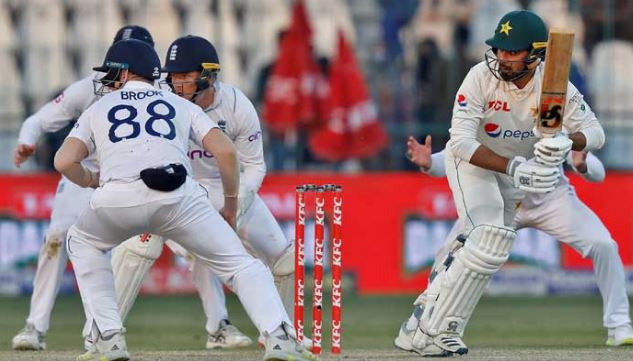 MULTAN: Imam-ul-Haq and Saud Shakeel struck defiant half-centuries to keep Pakistan in the hunt but England maintained the upper hand in the action-packed second Test in Multan Sunday.

Pakistan dominated the morning session when they bowled out England for 275 but their 355-run target meant they needed to pull off a record chase on home soil to level the series.

They seemed up for the task too but England’s seamers conjured up three magical deliveries after the lunch break to wrest back the initiative.

The see-saw contest changed complexion in the final session again following a 108-run partnership between Imam, who fell just before the close for 60, and Saud.

Saud was unbeaten on 54 with Faheem Ashraf on three at stumps.

Pakistan, who finished day three on 198-4, are still 157 runs short of their target.

Earlier, England added 73 runs to their overnight score of 202-5 on day three at the Multan Cricket Stadium.

Ben Stokes (41) needed 43 balls to score his first boundary and was the first to fall, holing out in the deep to trigger a collapse.

Spinner Abrar Ahmed picked up his 11th wicket in his debut Test by bowling Ollie Robinson through the gate.

Overnight batsman Harry Brook (108) reached his second hundred of the series before leg-spinner Zahid Mahmood (3-52) polished off the English tail.

Pakistan spinners claimed 18 of the 20 English wickets — the other two being run-outs.

The hosts had to rejig their opening pair following a hamstring niggle to Imam.

They promoted the struggling Mohammad Rizwan, who hit a flurry of boundaries early in his knock to transfer the pressure back on England.

James Anderson removed Rizwan for 30 immediately after lunch with a peach of a delivery that angled in and beat the outside edge to hit off stump.

Babar shouldered arms to a delivery pitching outside off-stump but jagged back to rattle his stumps.

Abdullah Shafique made 45 but could not protect his off-stump from the pace and movement of Mark Wood.

Imam came in at number five and revived Pakistan’s chase with Saud.