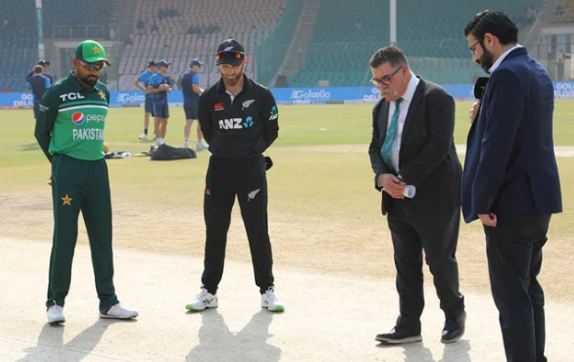 Pakistan captain Babar Azam opted to field first after winning the toss against New Zealand in the first one-day international (ODI) at the National Bank Cricket Arena in Karachi.

Henry Shipley will make his debut for New Zealand while Pakistan have included uncapped Usama Mir.

The preceding Test series between the two teams failed to produce a result in either of the two Tests — both in Karachi — ending a miserable season for both teams.

Pakistan failed to win any of their three-Test series at home, losing four of the eight Tests, including their first-ever 3-0 whitewash at the hands of England.

New Zealand also failed to win any of their last six Tests.

The last time these two sides faced off was in the 2019 edition of the 50-over World Cup and it was Babar Azam’s sublime 101 not out that helped them to a commanding six-wicket win in Birmingham. Their previous bilateral series (in 2018 in the UAE) ended in 1-1 as the final match was washed out.

Pakistan have a chance to become the number one ODI team in the world during the series against New Zealand.

If Pakistan whitewash New Zealand 3-0 during the three-match series, they will jump to the number one spot in the rankings with 114 rating points.

The Men in Green are currently in fifth place with 107 rating points. Meanwhile, New Zealand are at the top of the table with 116 rating points.

If Pakistan win the ODIs against New Zealand, it will be their fourth series win in a row.