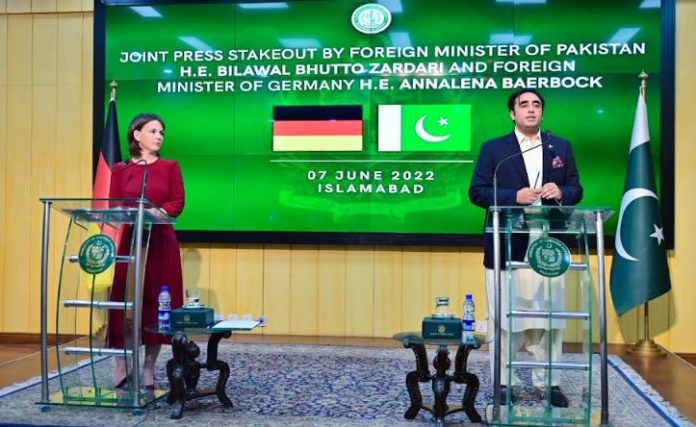 ISLAMABAD, JUN 7 – Foreign Minister Bilawal Bhutto Zardari Tuesday said that Pakistan always advocated for holding of dialogue and use of diplomacy as tools for pursuit of peace in the world.

Addressing a joint presser along with his German counterpart Annalena Baerbock, the foreign minister referred to the Russian-Ukraine conflict and said Pakistan had a firm position that it should not be dragged to any conflict.

Pakistan was a small and developing country, but it always advocated that international laws should be adhered to, he said, adding that all world conflicts should be resolved through peaceful means.

Replying to a question, Bilawal maintained that humanitarian crises in Ukraine could not be ignored and stressed that Pakistan would continue to advocate for dialogue and diplomacy as means in the pursuit of peace.

The foreign minister said Pakistan always emphasised upon the adherence of UN principles and its charters and respect for sovereignty and territorial integrity of countries.

Bilawal observed that ramification of conflict in the EU in shape of Russian-Ukraine conflict were also felt in Pakistan in the shape of increasing prices of fuel and food.

He reiterated that Pakistan called upon immediate cessation of hostilities and immediate initiation of peaceful dialogue.

He said considering the plight of people in Ukraine, Pakistan had dispatched four planeloads of humanitarian aid.

The foreign minister said Pakistan remained concerned about the well-being of the Ukrainian people, civilian casualties, massive exodus of refugees.

The foreign minister said Pakistan wanted to engage with all its neighbours. Pakistan played an important role in establishing the diplomatic ties between China and the US and it would continue to play a role of bridge, he added.

About the Indian Illegally Occupied Jammu and Kashmir (IIOJK) issue, he said that he had been vociferously raising the Indian atrocities during his engagements at the global fora and in his meetings with his counterparts of various countries including the US secretary of state.

The foreign minister warned that the situation in IIOJK had been fast deteriorating due to provocative steps of India that was trying to undermine the Muslim majority by marginalizing and turning it into minority through illegal steps.

The foreign minister said the international community must immediately take notice of the increasing incidents of persecution of minorities and rising tide of Islamophobia in India.

Bilawal citing the recent provocative and sacrilegious statements by the BJP leaders, said that such outrageous and highly condemnable statements had hurt the sentiments of the Muslims all over the world.

He said it was a proof that India had turned into a fascist country and it was no longer a secular India, but dominated by Hindutva ideology.

The foreign minister said Pakistan wanted peace with India, but it required a rational approach from the other side, adding with such irrational steps by India, the space for peace was being squeezed.

The foreign minister reiterated “The peace in South Asia was contingent upon peaceful resolution of the Kashmir issue.”

The foreign minister said that Pakistan and Germany enjoyed a close and long standing cordial cooperation based upon mutual respect and driven by bilateral ties and shared interests.

He said both the countries were also close partners in the European Union context.

Bilawal said German had been Pakistan’s largest trading partner in the EU context and its fifth world export destination.

Last year, he said Pakistan export to Germany stood around to $2.5 billion while German import remained at $1.3 billion.

Germany was also the seventh largest direct investor in Pakistan.

The foreign minister said Pakistan always emphasized upon and supported a peaceful and stable Afghanistan contributing to the regional progress and development and connectivity.

He stressed upon the international community to focus on the humanitarian assistance to the Afghan people who had been facing a financial crises.

A UN report had indicated that about 97 per cent of Afghan population had been pushed below the poverty line and faced immediate danger of hunger and starvation.

At the same time, the foreign minister, stressed that Afghan government must come up to the expectation of the international community with regard to upholding of the human and women’s rights and take effective steps against terrorism.

He urged the international community to actively engage with the Afghan government to avoid humanitarian crises in Afghanistan, adding releasing of its foreign assets would help its sagging economy.

The foreign minister also enumerated Pakistan’s efforts for the safe evacuation of foreigners in the earlier phases after the Taliban took control of the country.