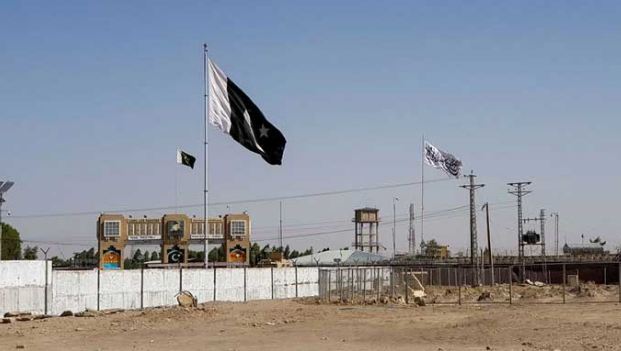 CHAMAN: After several days of hostility at the Pakistan-Afghanistan border in Chaman, authorities on both sides Tuesday agreed to resolve border and fencing issues through bilateral contacts and consultations.

The development came during a flag meeting between officials of the two neighbouring countries at the Friendship Gate in Chaman after the successful intervention of the local tribal council which was tasked with ending tensions between Pakistan and Afghanistan’s border forces.

District officials told Geo News that high-level civil and military officials participated in the meeting, along with the deputy commissioners of Pakistan’s Chaman and Afghanistan’s Spin Boldak. Religious scholars and elders also attended the conciliatory meeting.

The officials of both countries also agreed to resolve border issues through mutual consultation.

The Pakistani authorities said that the Afghan delegation expressed deep sorrow over the loss of life and property in Chaman’s civilian population. The neighbouring country’s delegation also acknowledged the sacrifices of the Pakistani nation and security forces for Afghanistan.

Participants in the flag meeting also prayed for the martyrs and recovery of injured people in the recent attacks prompted by the Afghan border forces.

For over a month, Afghan security officials and border forces have been engaged in opening fire on civilians and Pakistan’s security forces.

The latest cross-border attack on a civilian area in Pakistan took place on December 15, two days after Afghanistan apologised for the incident —  in which indiscriminate firing by Afghan border forces claimed the life of one person and injured over a dozen.

A similar attack also took place on December 11 during which six civilians were martyred while 17 were wounded.

Pakistani security and border forces befittingly responded to these unsolicited attacks while Afghanistan’s chargé d’affaires in Islamabad were also summoned by the government.