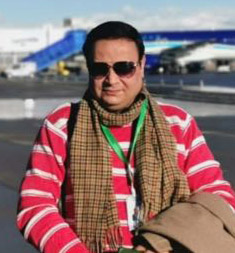 Most recent “paradigm shift” in national/foreign policy of Pakistan from geopolitics to “geo-economy” has now opened new window of opportunities to establish bilateral or trilateral ties in diverse sectors of economy, trade & commerce, joint venture, science & technology, Artificial Intelligence (AI), digitalization, ICT, infrastructural development, banking & finance, FDIs, education and culture with regional countries mainly, Association of Southeast Asian Nations (ASEAN) with which it has normal, friendly and progressive relations, unmarred by any conflict or disputes. They cooperate with one another on full range of international issue.

ASEAN was established in 1967. It is an economic alliance of 10 member states in Southeast Asia. The member states are Brunei, Cambodia, Indonesia, Lao, Malaysia, Myanmar, Philippines, Singapore, Thailand, and Vietnam. According to official statistics (2020), population of the ASEANs was about 655 million people in 2019 which represented 8.5 percent of the world population.

It has holistic approach for “conflict resolution” which is based on consultation, consensus, and non-interference. It is a major partner of Shanghai Cooperation Organization (SCO) and maintains a global network of alliances, and is considered by many as a global powerhouse. Now ASEAN is a leading force of regional trade and security issues, involved in numerous international affairs, and hosts diplomatic missions throughout the world.

Pakistan desires to achieve two major objectives in its negotiation with the ASEAN and its member states. Pakistan should be accepted as a full dialogue partner and, also a member of the ASEAN Regional Forum (ARF).

Expansion of trade and investment between Pakistan and ASEAN countries is eminently feasible and will be mutually rewarding. There is considerable degree of complementarity between the two sides.

Pakistan’s attempt to diversify its industrial base could find openings in ASEAN markets, and it could also benefit from the experience of some ASEAN countries, like Singapore, Malaysia and Thailand, which have been quite successful in achieving economic progress through industrialization. Some ASEAN countries like Indonesia have valuable experience in tourism, Islamic banking, and insurance, food-processing and fruit-canning which could be of benefit to fruit producers of Pakistan. ASEAN countries may be keen to relocate some of their labour intensive industries to Pakistan.

Tourism is another large untapped area of development. Pakistan has a lot more to offer than many Southeast Asian countries, including Malaysia and Singapore which have yet been able to develop a thriving and profitable tourist trade. The present low level of trade between Pakistan and ASEAN can be expanded if the private sector has access to information about the opportunities in trade and investment and is assisted in making contacts with potential partners.

Indonesia and Malaysia are the two strongest economies of the ASEAN. Pakistan has close relationship with both the countries. Indonesia is the strongest country in ASEAN with reference to GDP and GNP propositions. It is the most populous Muslim country with much commonalty to Pakistan in terms of culture, and values. Both countries are members of the Organization of Islamic Cooperation (OIC), SCO and ECO which may be used for the further strengthening of bilateral relations.

Historically, Pakistan played important role during the Indonesian Revolution. The founder of Pakistan urged Muslim soldiers serving in British army to join hands with Indonesians in their fight against the Dutch Imperial colonization. As a result, 600 Muslim soldiers left the colonial forces putting their lot at stake, and allied with Indonesians. Out of these 600 soldiers, 500 died in war. Thus historic “holy connection” is there to strengthen diplomatic ties for the befitting propositions of both the countries.

Critical analysis revealed that Pakistan’s relationship with Indonesia was greatly developed during the time of Mr Sukarno, first president of Indonesia and Gen. Ayub Khan. During the Indo-Pakistani War of 1965, Indonesia offered to provide Pakistan with military help, and seized ‘Andaman and Nicobar Islands’ of India so as to distract it from the Kashmir front.

For the further strengthening of bilateral military cooperation, Pakistan has signed a Memorandum of Understanding (MOU) on defense cooperation with Indonesia. It offers Indonesia to take part in joint-manufacturing between Pakistan and China of the JF-17 fighter jet. The exchange of military personnel for training between Indonesia and Pakistan also increased.

Indonesia being the strongest and largest economy in the ASEAN has great influence in ASEAN and also looks after evolving from regional power to becoming a major player in global affairs. Pakistan needs to support Indonesia in achieving its long-aimed goals through establishing connections and in return expect to earn dividends.

Undoubtedly, the incumbent government has initiated concrete steps to speed-up bilateral economic cooperation with South Korea, Singapore, Japan, and Malaysia and expressed interest in upgrading Pakistan’s sectoral partnership with ASEAN to full partnership. It hopes that further expansion of economic and strategic ties with ASEAN may help Pakistan to seek more and more FDIs, boost employment opportunities, improve the balance of trade by amplifying exports, and boost Pakistan’s economic clout and regional connectivity.

The China-Pakistan Economic Corridor (CPEC) has opened up avenues of regional integration and economic growth for Pakistan. CPEC may help boost Pakistan’s exports to ASEAN and invite investments if it is branded properly by providing numerous befitting propositions to all the members of the ASEAN.

Malaysia is one of Pakistan’s top trading partners and the volume of trade between the two countries has been around USD $2 billion. Pakistan’s export potential under Pakistan and Malaysia’s 2008 FTA alone is more than double this at USD $4.6 billion. There is an urgent need rectify the trade balance favoring the ASEAN partners by increasing the export flow to countries that ease the import barriers like Indonesia, which removed 30 percent of its import duties on 20 of Pakistan’s exports last year.

Pakistan may also exploit the comparative advantage its exports, commonly cotton and textiles, enjoyed in markets in Brunei, Cambodia, Thailand, and Australia. There is also demand for Pakistani arms exports in ASEAN, evidenced by Malaysia’s interest in buying JF-17 Thunder fighter jets and anti-tank missiles from Pakistan.

Pakistan is an important exporter of seafood and raw materials to Thailand, the two countries have been negotiating a FTA. Further, Thai companies are seeking investment avenues in the country as they recognize it as a significant trading partner. Likewise, appreciating the potential of Pakistan’s automotive market, the Malaysian automotive company Proton will open its first South-Asian production facility in Karachi by 2021.

There are certain impediments to have stronger economic ties with the ASEAN. Japan’s Free and Open Indo-Pacific (FOIP) concept, shared by the United States and other regional allies has conflicting chemistry with China’s Belt and Road Initiative (BRI) in the region, Japan strategic ties with India through the Quad and moreover India’s persuasion to “urge” South Korea not to invest into CPEC last year all present element of strategic power politics.

Moreover, Beijing’s principal stance towards the South China Sea (SCS), littoral states in the region have faced growing territorial disputes with China and maritime tensions and India’s “Act East” policy, considers Southeast Asian nations as important trading partners, and further does not look at Islamabad’s full membership in ASEAN favorably are the stumbling blocks in further strengthening bilateral relations between Pakistan and ASEAN.

Pakistan should now consider to expanding economic engagement with ASEAN. ASEAN trade volume with China stands at USD $644 billion despite tensions in the SCS. Similarly, while Australia signed a defense deals with India, its trade surplus with China increased by 174 percent in March 2020.

Just as such countries have found ways to engage with China despite direct conflicts, Pakistan must likewise create its own way into the Southeast Asian/ASEAN markets in which “innovative diplomacy” may help the country to boost its role as a player in regional issues, for instance, Pakistan could help Japan address its Hormuz Dilemma concerns over the secure passing of energy supplies through the strait and assist Tokyo’s mediation efforts in the Middle East, leveraging it to advance ties with Japan. Likewise, enhancing engagement with Southeast Asia will expand Islamabad’s economic footprint and political clout in the region, ultimately adding to its regional connectivity pursuits.

It is suggested that trade volumes between Pakistan and ASEAN may be increased through trade via the Chinese ports which provides shortest trade route resulting in less transit time and lower costs. China has granted Nepal access to some of its ports; a similar agreement could be drafted with Pakistan.

Pakistan’s Gwadar Port has enhanced China’s access to its west, Northwestern Chinese Ports, for example Qingdao port, can supplement Pakistan’s access to Northeast Asia. For instance, while it can take over twenty days at sea for Pakistani exports to reach Port Busan in South Korea from Karachi, it could take thirteen days if trade is done via land.

The Special Economic Zones (SEZs) Pakistan under flagship of CPEC is important for inviting foreign investments. Pakistan has offered SEZ’s tax exemptions and other special incentives to Singapore. The Singaporean companies have shown interest in investing in CPEC projects. Pakistan has proposed to establish an exclusive economic.

People-to-people contacts such as academic exchanges and cultural programs should be promoted between Pakistan and ASEAN countries. People-to-people interaction, frequent dialogue and discussions are required so that each is able to understand each other better. Currently, the climate is conducive for foreign investment and joint ventures in Pakistan. There is a need to great trade exchange and promotion of investments between Pakistan and ASEAN.

Being prominent regional expert I submit concrete efforts should be initiated to establish a joint Pak-ASEAN Business Forum for the further strengthening of relationships in diverse sectors of economy, greater socio-economic integration, food & energy cooperation, tourism, education, culture cooperation, military cooperation and last but not least make bridges of better social, political and economic understanding between Pakistan and ASEAN through “holistic” approach of “participatory development”. Pakistan has rich experience of anti-terrorism tactics/strategies which should be shared with ASEAN for achieving greater regional stability and peace in the days to come.

Moreover, majority of ASEAN member countries are Muslims which may be a bench mark for greater socio-politico integration. Moreover, artificial intelligence, cyber security, digitalization, agriculture development and last but not least, tourism would be preferential areas for future cooperation between Pakistan and ASEAN. Security matters may be further streamlined and strengthened by granting Pakistan membership in ASEAN Regional Forum (ARF).

The writer is the  Director: Geopolitics/Economics

Member Board of Experts, CGSS, Islamabad