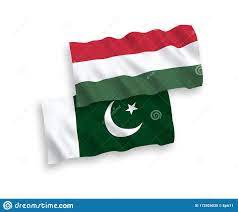 The 5th round of Pakistan-Hungary Bilateral Political Consultations (BPC) was held in Budapest today. The Pakistan side was led by Dr. Muhammad Tariq, Additional Secretary (Europe); while Laszlo Varadi, Deputy Secretary for State Cooperation with South led the Hungarian side. Mr. Muhemmed Aejaz, Ambassador of Pakistan to Hungary, also attended the meeting.

The exchange of views covered the entire spectrum of bilateral relations, including matters relating to political, economic and trade, culture, defence and people-to-people contacts. The two sides also reviewed recent developments in bilateral relations and explored the way forward to enhance cooperation in diverse fields. A review of regional and international issues of mutual interest such as the situation in Afghanistan and IIOJK was part of the parleys.

Both sides expressed satisfaction at the current pace of cooperation after the Hungary-Pakistan Trade and Economic Window (HPTEW) launched in March 2021, and the first Hungary-Pakistan Business Forum inaugurated by the two Foreign Ministers, as well as the subsequent visit of Foreign Minister Peter Szijjártó to Pakistan in April 2021. Both sides expressed the desire to further strengthen cooperation in economic and trade, investment, industry, agriculture, water resource management, information technology, energy, industry, healthcare and pharmaceutical, sports, culture, education and parliamentary exchanges. Dr. Tariq emphasized the importance of regular high-level exchanges in boosting linkages in areas of mutual interest. The Additional Secretary also highlighted the steps taken by the Government of Pakistan to attract international tourism and bring foreign investment into Pakistan.

The Additional Secretary briefed the Hungarian side on Pakistan’s positive role in facilitating the peace efforts with the aim of promoting an inclusive, broad-based and comprehensive political settlement in Afghanistan through an Afghan-owned and Afghan-led process. The Additional Secretary also apprised the Hungarian side about the grave human rights violations being committed by India in IIOJK, underlined that India had vitiated the atmosphere by taking the illegal and unilateral step of 5 August 2019, and stressed that the onus was on India to create an enabling environment for engagement and result-oriented dialogue.

Dr. Tariq called on Minister of State for Public Administration of the Ministry of Foreign Affairs and Trade, Dr. Csaba Balogh, and underscored the commitment of Pakistan’s leadership to further deepen relations with Hungary in diverse areas.

Besides, the Additional Secretary also met with Deputy State Secretary for Cultural Diplomacy, Mr. Marton Schoberil and exchanged views on promotion of cultural relations between the two countries. Subsequently, the two sides signed an MoU on ‘Cultural Cooperation’ between Pakistan and Hungary for the Years 2021-2023.

Pakistan-Hungary bilateral relations are historically marked by friendship, cooperation and similarity of views on many important issues. Pakistan and Hungary have maintained close collaboration at international fora, especially at the UN. Pakistan is firmly committed to further expanding and developing mutually beneficial cooperation with Hungary in all areas of mutual interest.

Both sides agreed to hold the next round of BPC next year on mutually convenient dates.