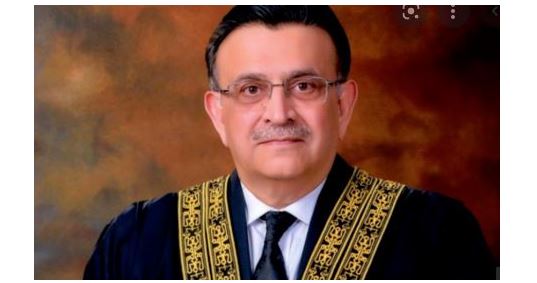 • Court asks for intelligence reports on events of May 25, 26
• Justice Yahya suggests contempt proceedings against Imran

ISLAMABAD: While the Pakistan Tehreek-i-Insaf (PTI) finally approached the Supreme Court to seek its protection from the alleged ‘state torture’, the apex court on Wednesday directed the city administration and spy agencies to submit reports within a week explaining at what time PTI chairman Imran Khan had asked party workers to reach D-Chowk in violation of the last week’s court order and whether the crowds entering the Red Zone were ‘organised and supervised’ or their act was random.

Headed by Chief Justice of Pakistan (CJP) Umar Ata Bandial, a five-member SC bench observed that peaceful protest was a constitutional right but it must be exercised subject to permission by the state.

The filing of the much-trumpeted petition by Barrister Ali Zafar on behalf of PTI secretary general Asad Umar on Wednesday coincided with the release of the damning order by the larger Supreme Court bench.

As the petition sought a restraining order against the use of ‘coercive measures’ or ‘intimidating tactics’ to stop supporters and leaders of the PTI from holding the next ‘peaceful Azadi March’ in Islamabad, PTI chairman Imran Khan linked the announcement of the next protest date with a decision of the apex court on the matter.

The PTI in its petition argued that locking down an entire province and restricting public movement amounted to illegal confinement and therefore contrary to the fundamental rights and asked the SC to restrain the federal and Punjab governments from restricting the movement of the people by any means. The petition also requested the court to stop the government from using force or any strong-arm tactics against anyone participating in the upcoming peaceful assembly.

The freedom of movement and the right to peaceful protest and procession is a fundamental right of all the citizens of Pakistan, under the 1973 Constitution, the petitioner emphasized, while claiming that the planned march was intended to be peaceful without violating any law.

The SC bench had earlier on May 26 dropped hints at taking cognizance of the unfortunate situation on the previous night.

In its order, the court observed that the high moral ground held by the parties (government and the PTI) diminished, because public rights, interest and property of the disinterested public were “breached” and “damaged badly”.

Authored by the CJP, the majority order of the court asked Islamabad police chief and chief commissioner, interior secretary, director generals of the Intelligence Bureau and Inter-Services Intelligence (ISI) to furnish reports at what time did Mr Khan asked party workers to reach D-Chowk, and when, where and how did the crowd cross the barricade to enter a hitherto closed area.

It was further asked whether the protesters entering the Red Zone was ‘organised’ and ‘supervised’ or they moved randomly. Also, if there were any acts of provocation or breach of assurance by the government, it asked.

If any action or treatment meted out by the Islamabad police against the protesters was disproportionate to the actual or perceived wrong committed by the protesters, asked the SC.

Also, the court sought details of how many protesters managed to enter the Red Zone, which security arrangements were relaxed by the executive authorities, whether any security barrier cordons were broken or breached by protesters, how many protesters or party workers reached G-9/ H-9 ground and how many civilians were injured/killed/ hospitalised or arrested. The reports, the SC ordered, should reach within one week for perusal in chambers by members of the larger bench.

In his additional note, Justice Yahya Afridi, a member of the larger bench, observed that Mr Khan, prima facie had disobeyed the May 25 court directions, therefore contempt proceedings be initiated against him for allegedly disobeying the directions instead of calling reports from the state agencies.

Justice Afridi also disagreed that no credible material was available before the court for initiating independent contempt proceedings against Mr Khan who allegedly disobeyed the May 25 court order.

The SC viewed the May 25 events with concern, observing that apparently the assurances conveyed to the court by counsel for PTI leadership may have been dishonored by its workers/ supporters/ sympathizers by proceeding to D-Chowk in the red zone area and by allegedly committing acts of arson and destruction of public and private properties on the way.

The court noted Mr Khan reached Jinnah Avenue leading to D-Chowk on May 26 early morning and announced the postponement of the Islamabad sit-in for six days. As a result, further damage to property or injury to human life was averted, it observed.

Nevertheless, the CJP noted, there remained the lurking question whether the responsibility for the events of May 25 evening comprising reckless acts of mob anger could be blamed upon the senior leadership of PTI.

So far, there was no evidence or allegation that such acts happened randomly or were committed on the instigation of any party, Justice Bandial remarked. At its most elementary level, the PTI leader appeared to have assured the holding of a political rally at G-9/H-9 ground and therefore not to assemble and stage sit-in at another venue including D-Chowk.

Also, the SC disposed of the petition of the Islamabad High Court Bar Association for becoming infructuous.