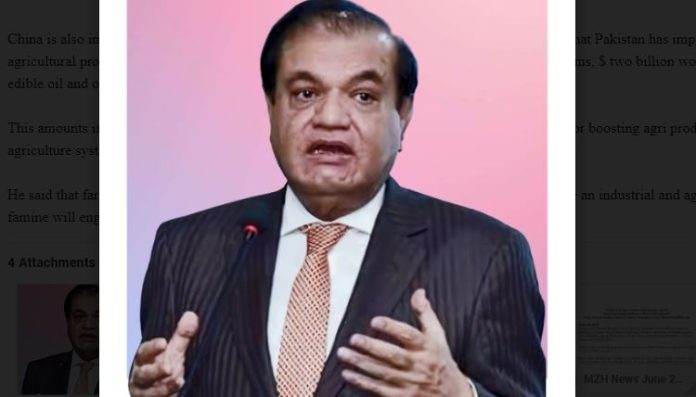 Urgent steps are needed to avoid food insecurity in Pakistan otherwise the situation will be out of control, he said.

Talking to the business community, the veteran business leader said thatunseasonal snowfall, rains and floods have also worsened the situation in many agriculture exporting countries while crops are being affected all over the world including Pakistan due to rising fuel prices.

Mian Zahid Hussain said that the current state of agriculture in the world has never been seen in the past and even if the whole world works together to tackle it, it could take many years to restore it.

Maize production around the world has also been severely affected, which will also push up the prices of meat and poultry as it is widely used as animal feed, he said.

Ukraine’s share in global wheat exports is 11 percent and maize exports 17 percent and even if the war ends today which is unlikely, it will take many years to restore its agriculture as its infrastructure is destroyed, he observed.

The business leader further said that despite the food crisis, the process of making fuel from agricultural commodities is also going on which is unfortunate.

This amounts if converted into Pakistani currency becomes Rs4300 billion which can be used for boosting agri production, introducing a corporate agriculture system and supporting farmers.

He said that farmers should be lured to plant wheat, pulses, canola, tea, rice olives etc. to ensure an industrial and agricultural revolution otherwise famine will engulf the country soon.