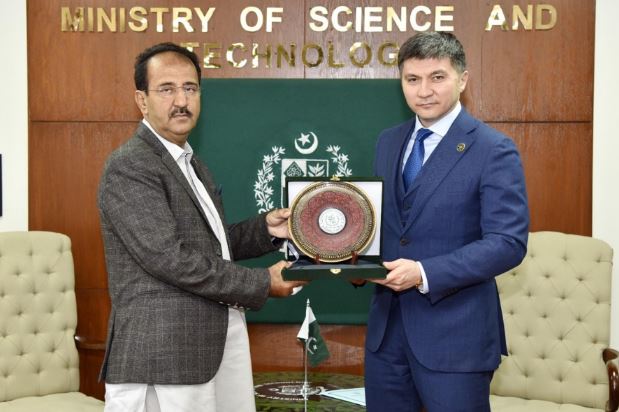 ISLAMABAD, NOV 01 (DNA) — Federal Minister for Science and Technology, Agha Hassan Baloch and the Ambassador of the Republic of Kazakhstan, Yerhan Kistafin in a meeting held here Tuesday reaffirmed their firm resolve to broaden ties in the field of Science, Technology, Innovation and Research.

They discussed various measures to strengthen the bilateral ties of brotherly states in areas of Science, Technology, Innovation and regional connectivity by holding delegation-level talks, joint working group sessions and signing of MoUs.

Zainul Abdeen, joint scientific adviser and Director General of PSQCA has been appointed by the minister to represent Pakistan at the summit. Federal Minister Agha Hassan Baloch while talking about the summit, said that the mutual collaboration of OIC member states in Science, Technology, Innovation and Research was very optimistic and the need of the hour.

While commending the progress of Pakistan in Science and Technology, the Ambassador, Yerhan Kistafin reiterated his desire to further the scientific cooperation, exchange of each other’s experiences and signing of MoUs with Pakistan.

The sidelines meetings between the Ministry of Higher Education and Science of Kazakhstan, the Ministry of Science and Technology Pakistan, HEC and different universities from both sides during the OIC 15th session also came under discussion.

The meeting was marked with traditional warmth, mutual understanding and trust. The scientific collaboration between the two countries was first signed in 1999 and in 2020 it was again extended for the next ten years, however, it would be further activated during the OIC 15th session. =DNA