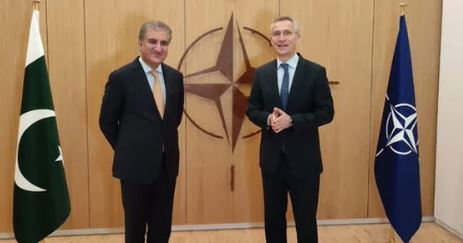 The two leaders reviewed the status of bilateral cooperation and exchanged views on the regional situation, including the latest developments in Afghanistan.

Recalling his last meeting with the Secretary General in Brussels in June 2019, Foreign Minister Qureshi underscored that the regular high-level political and military engagements between the two sides have contributed towards strengthening bilateral cooperation and partnership.

Highlighting the importance of peace and stability in Afghanistan for Pakistan, the Foreign Minister stressed upon continued international engagement and support to stabilize the situation in the country. Referring to the two decades of Pakistan-NATO cooperation in Afghanistan, the Foreign Minister underscored the importance of continued collaboration to tackle the threat of terrorism.

Secretary General Stoltenberg appreciated Pakistan’s invaluable support during the NATO’s two-decade long engagement in Afghanistan, including through the Air and Ground Lines of Communications as well as the pivotal role during the evacuation of NATO staff, nationals of NATO member states from Afghanistan.

The Foreign Minister expressed the hope that the international community would expeditiously extend financial and humanitarian assistance to enable the country to meet its compelling needs, help avert a humanitarian catastrophe, stop fresh outflows of migrants, and prevent Afghanistan from once again becoming a safe haven for terrorists.

Highlighting Pakistan’s efforts towards peace and stability in South Asia, Foreign Minister Qureshi stated that Pakistan pursues a policy of peace with all its neighbours and seeks to resolve all outstanding issues, including the Jammu and Kashmir dispute, through dialogue and engagement.

Both sides agreed to work together for promoting Pakistan-NATO relations and to remain engaged on issues of mutual interest.