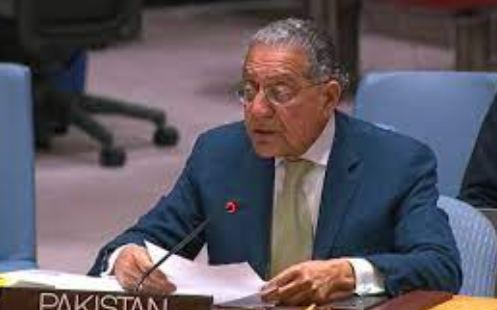 United Nations, JAN 13 (DNA) — Pakistan, citing the unresolved Kashmir and Palestine disputes, has called for the implementation of United Nations Security Council resolutions that provide for the exercise of the right to self-determination by the Kashmiri and Palestinian people.

Ambassador Munir Akram told the 15-member body that the Security Council needs to actively promote the resolution of conflicts and disputes, not simply manage them, much less ignore them..

“The Council has not been able to secure consistent implementation of its own resolutions, such as the resolutions relating to Palestine or Jammu and Kashmir,” he said in the course of a debate on ‘the Rule of Law among Nations’.

“In these cases,” the Pakistani envoy added, “The right to self-determination has been suppressed brutally and foreign occupation has been allowed to persist over several decades. It is essential to elaborate the modalities through which this principle can be implemented universally and consistently in the contemporary context.”

Noting that the international community has adopted laws to regulate the use of force, especially military force, he also pointed out that the Charter has placed explicit restraints on the use of force, except in cases of defence. It has laid down principles which have been a foundation to maintain world order over the past seven decades and prevent another world war.

The Security Council’s resolutions — whether adopted under Chapter VI (pacific settlement of disputes) or VII (enforcement action) of the UN Charter, are legally binding since Member States are obliged, under the Article 25 of the Charter, to implement the Council’s decisions, Ambassador Akram said.

The Secretary General should be less reticent in exercising his authority under Article 99 of the Charter, which gives him the role to lead the Security Council to act when and where international peace and security are under threat, he said.

No party to a conflict or dispute should be able to refuse the Secretary-General’s ‘good offices’; nor reject mediation and arbitration, the Pakistani envoy said. “And, the remit of judicial mechanisms, especially the ICJ (International Court of Justice), should be fully utilized, e.g., by making the Court’s jurisdiction mandatory on issues that are on the agenda of the Security Council.”

The Rule of Law is critical for the maintenance of interpersonal, societal institutional relations at the national and international level, Ambassador Akram said. “Today,” he said, “world peace, and the international security architecture, is under grave threat,” Several issues need to addressed, how to:

— promote universal and consistent respect for fundamental principles of the UN Charter; — deal with the underlying causes of conflicts and disputes; contain great power tensions, which often paralyze the Council;

— halt the escalating new arms race, including in new weapons and domains; and, — empower and fully utilize the United Nations and its organs to build a durable structure of international peace and security. = DNA