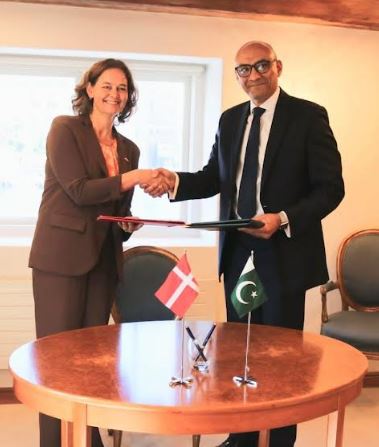 ISLAMABAD, AUG 31 /DNA/ – Pakistan signed the Green Framework Engagement Agreement with Denmark today in Copenhagen. The Agreement was signed by Pakistan’s Ambassador to Denmark, Ahmad Farooq and by Denmark’s Ambassador to Pakistan, Lis Rosenholm.
The Green Framework Engagement is underpinned by the mutual interests, high ambitions and shared visions of the two countries in a green and sustainable future for the planet including through private sector engagement and public-private partnerships. The Green Framework Engagement will mark the first step in creating stronger collaboration in areas such as climate change mitigation and adaptation, and a just and sustainable green transition. Following the conclusion of the Framework Engagement a Joint Plan of Actionwill be finalized between the two countries containing specific activities of collaboration.
Pakistan is keen to benefit from Danish expertise to build its capacity for dealing with the repercussions of Climate Change. The current floods in Pakistan, which have been induced by climate change, underscore the need for increasing such cooperation between the developed and the developing countries.
Denmark is already assisting Pakistan under its Danish Energy Transition Initiative (DETI) through whichtechnical assistance is being provided to the Ministry of Energy in the areas of planning of long-term energy scenarios and integration of renewable energy into the existing grid.
Pakistan and Denmark enjoy cooperative bilateral relations encompassing all areas of mutual interest,including trade and investment, climate change and renewable energy. A sizeable Pakistani Diaspora living in Denmark provides a strong link between the two peoples. The two countries also closely coordinate on regional and international issues. The signing of Green Framework Engagement Agreement will contribute to further strengthening of close cooperation between the two countries.