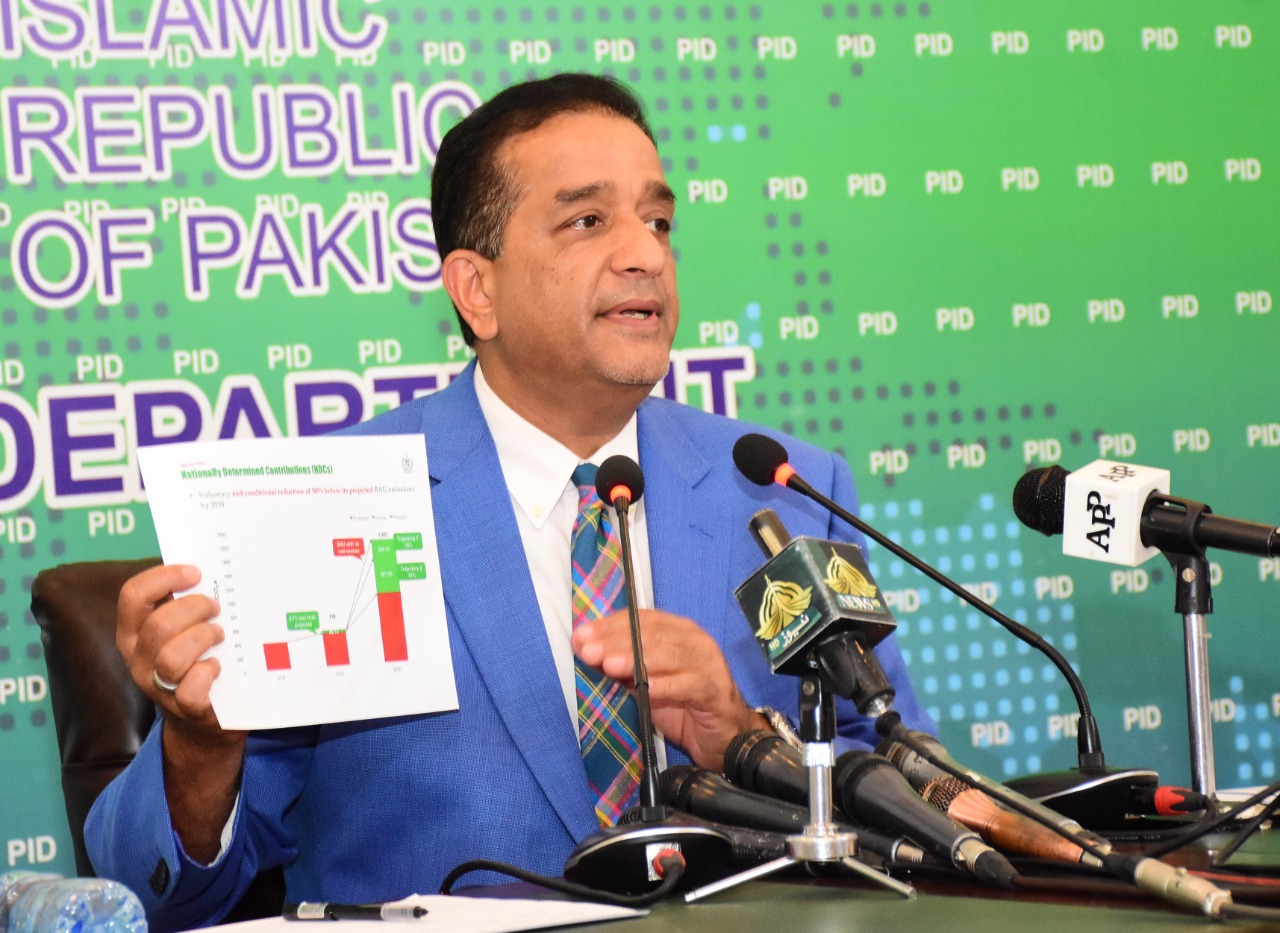 Special Assistant to Prime Minister on Climate Change Malik Amin Aslam on Thursday announced that Pakistan would bring down the national carbon emissions by 50 percent by year 2030 from the current levels.

The goal of cutting the country’s soaring carbon emissions has been set under the revised Nationally Determined Contributions (NDCs), a carbon emissions reduction plan, approved by Prime Minister Imran khan on October 13, 2021, to be submitted to the UN Framework Convention on Climate Change ahead of UN global climate conference starting from November 1 in Glasgow, Malik Amin said.

Though this is ambitious but achievement goal that would be attained through moblisation of local and available international funding resources with the assistance of various UN-supported funding channels including Green Climate Fund, he said while addressing a press conference here at the Pak-China Center.

Pakistan has been placed 5th on Global Climate Risk Index, though Pakistan’s contribution to global GHG emission is less than 1%. This sole factor entails Pakistan to implement adaptation and mitigation measures in various sectors including forestry to address the risks associated with climate change.

Spelling out details of the roadmap for cutting on the country’s carbon emissions levels, the PM’s aide said that while 15 percent reduction in carbon emissions would be made through country’s own resources 35 percent heat trapping emissions’ reduction would be subject to availability of international financial support from various available funding channels such as Global Climate Fund.

But Billion Tree Afforestation Programme of the KP government and the Ten Billion Tree Tsunami Programmed of the federal government alone would sequester around 500 Mt CO2e carbon emissions by year 2040, if implemented fully, he emphasized.

The PM’s aide detailed that 60 percent of all energy produced in the country would be generated from renewable energy resources by 2030 and 30 percent of all new vehicles sold in Pakistan in various categories would be electrically-powered, a goal that would be achieved by the year 2030.

He highlighted that Pakistan’s financial needs for adapting to the impacts of climate shocks stood between US $6 to US $14 billions per annum, direly needed to protect lives and livelihoods and ecosystems from devastating impacts of the climate crisis.

Spelling out national green programmes launched to cut the country’s earth-warming carbon emissions, Malik Amin Aslam recalled that various green initiatives have been already in place launched as a part of the PM Imran khan’s vision for clean green Pakistan.

Malik Amin informed media that the current green initiatives of the country showcase incumbent government’s surging progress in climate change area that range from policy and programmes on Nature-based solutions to technology-based interventions.

Pakistan, recognizing the role of nature in climate adaptation and mitigation has developed robust natural capital restoration efforts including Ten Billion Tree Tsunami Programme (TBTTP), Protected Areas Initiative (PAI) etc. These programms have also served as a way to enhance livelihood opportunities for the most vulnerable including women and youth. In addition, Pakistan has introduced number of policy actions focused on mitigating greenhouse gas emissions from high emission sectors like energy and industry, the PM’s aide added.

He said further focus of the present government is climate actions during the decade ahead as decided by the current climate-induced vulnerabilities aiming to achieve reduced poverty and ensure stable economy.