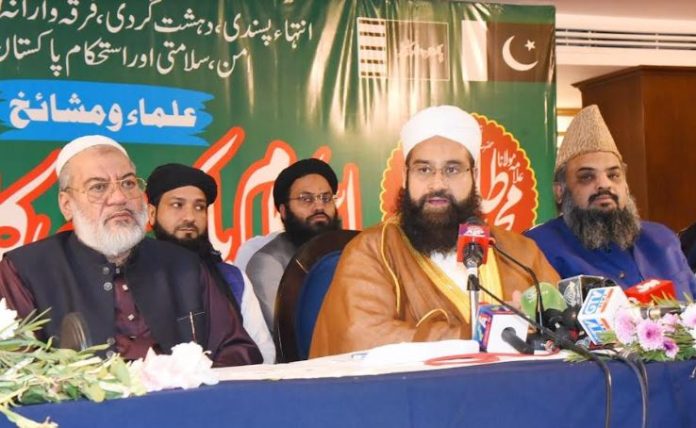 The Central Advisory Body also decided to organize the Pakistan Ulema Council in all areas across the country and to arrange  ‘Pakistan Stability Conferences’ and seminars all over the country.

The meeting of the Central Executive and Advisory Body was attended by the Ulemas-Mashaykh and important office bearers of Pakistan Ulema Council from all over the country.

The declaration issued by the council following the meeting said:

1) The prevailing circumstances and situation in the country requires that political and religious parties should adopt an attitude of understanding and harmony for the economic stability in Pakistan, and continue efforts for the elimination of interest system and for eradication of extremism, terrorism. For the cause of

reforms in the justice and electoral system and to ensure economic development in the country, trends of extremism and intolerance should be eliminated.

Tehreek-e-Insaf and the government should start meaningful dialogues and leadership of PTI should return to the parliament making an end to long-march politics.

2) The campaign against the Pakistan’s security forces and the officials of the country’s security agencies should be stopped immediately.  All the officers of the Pakistan Army are patriotic and highly competent.

3) In the case of Arshad Sharif’s murder, attack on Imran Khan and on the incident of Azam Swati, blaming the officials of the security institutions without any investigation and evidence is not right.

4.  The Pakistan Ulema Council fully agrees with the declaration of the conferences called by Darul Ifta regarding environmental and climate changes and also announced to establish a committee under the chairmanship of Central Chairman Hafiz Muhammad Tahir Mahmood Ashrafi to communicate with international organizations and religious leaders in this regard.

6) Pakistan Ulema Council also decided to cooperate with the International Interfaith Harmony Council to play a more effective and vibrant role with regard to interfaith and inter-religious harmony, minorities, women’s issues and respective rights.

7) Pakistan Ulama Council in view of the conference held in Sharm-Al-Sheikh with reference to the environment held in cooperation of Egypt and Saudi Arabia welcomes the initiative of Saudi Crown Prince Muhammad bin Salman for Green Middle East and Green Saudi Arabia stating that religious leadership are aware of their respective responsibilities in this regard. All religious scholars and respective leadership should also play their role on issues of climate change and increasing challenges of poverty in the world.

8) The  Central Executive and Advisory Body of Pakistan Ulema Council expressed their gratitude to the King of Bahrain and the head of the Bahrain Islamic Council, Sheikh Al-Azhar Ahmed Tayyib and Pope Francis, while fully endorsing the declaration of the interfaith conference organized in aegis of Bahrain Dialogue Forum held in Bahrain.

9)  In view of the global situation, the Pakistan Ulema Council decided to hold ‘World Peace Conference’ in Islamabad in March 2023, in which Imam-e-Kaaba, Sheikh Al-Azhar, Pope Francis, Bishop of Canterbury, Secretary General of the Muslim World League, Dr. Muhammad bin Abdul Karim Al-Issa will be invited.