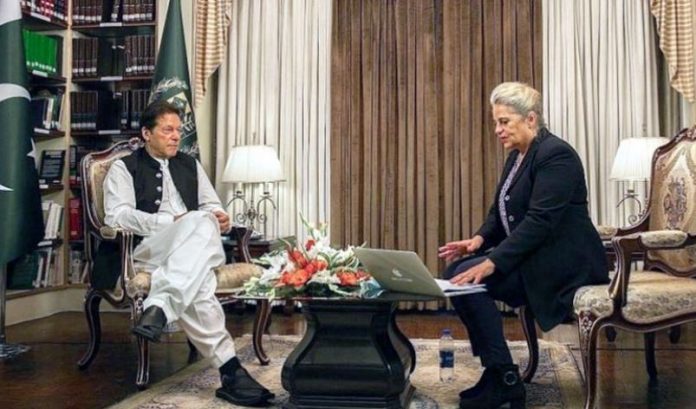 In an interview with German weekly news magazine Der Spiegel, he warned that the region was a hotspot and could flare up at any time.

“That’s why we expect the US, as the strongest country in the world, to be even-handed, whoever becomes president. The US thinks India will contain China, which is a completely flawed premise.

“India is a threat to its neighbours, to China, Bangladesh, Sri Lanka and to us. It has the most extremist, racist government on the subcontinent. It is a fascist state, inspired by the Nazis in the 1920s and 30s,” he said.

The premier’s comments come days after the US and India signed a pact to share sensitive satellite and map data.

Editorial: US should be well aware of the complexities that are weaved into interstate dynamics in South Asia

During a visit to New Delhi, US State Secretary Mike Pompeo said that the two countries had to work together to confront the threat China posed to security and freedom.

With the US elections just a few days away, Imran refrained from saying which candidate had a better shot at winning.

“Joe Biden is in front in opinion polls, but Donald Trump is very unpredictable because he’s not like normal politicians. He plays by his own rules,” he said.

Imran said when he started his own party he had to do a lot of “out-of-the-box thinking”. “[PTI] was the first to rely on social media and the first to attract the youth to our rallies.”

Asked whether he saw similarities between himself and the US president, Imran said: “We [PTI] had to be very unorthodox and, in some ways, Donald Trump does too.”

During the interview, the premier said Pakistan had “nothing to do with the terror attacks on 9/11”.

“Al Qaeda was in Afghanistan. After 9/11, we should not have allowed our army to become involved in the war. I opposed it from day one. The US put pressure on us, and the military dictator General Pervez Musharraf succumbed to that pressure.”

When the interviewer pointed out that, at the time, Pakistan, Saudi Arabia and the United Arab Emirates were the only countries supporting the Taliban, he replied: “Don’t forget, Osama bin Laden was a hero in the 1980s. He supported the Mujahideen against the Soviets in Afghanistan, and he was backed by both the CIA and Pakistan.

“It was Pakistan’s right to recognise the Taliban but Pakistan had no control over the Taliban. When Pakistan asked the Taliban to hand over Bin Laden to the Americans, they refused.”

Asked how Pakistan was able to bring the Taliban to the negotiating table, the premier said the country had leverage due to 2.7 million Afghan refugees in Pakistan.

However, he added that no one can predict the way things will go in Afghanistan. “What I can say is that after Afghanistan, the country that wants peace the most is Pakistan.

“We have lost 70,000 people in this conflict, and our tribal areas adjacent to the Afghan border have been devastated during the last 15 years. Half of the people in these areas have become internally displaced.”

Imran was also asked about the recent visit of Afghan politician and Hizb-i-Islami leader Gulbuddin Hekmatyar to Islamabad. He said that he had spoken to Dr Abdullah Abdullah, leader of Afghanistan’s High Council for National Reconciliation, prior to speaking to Hekmatyar.

“We have no favourites in Afghanistan. Our only interest is that the future government in Kabul does not allow India to operate from there against Pakistan,” he said, adding that Hekmatyar took part in the elections and accepts the constitution of Afghanistan.

He also regretted the “double image” given to Pakistan. “It all started in the 1980s, after the Iranian revolution. Many in the West began looking at Muslim countries as if there was a divide between liberals and fundamentalists — a very artificial assessment.

“Muslim countries are no different from other communities. All communities are divided into moderates, which make up the majority, and the extremists.”

“Pakistan has more freedom of speech than almost any Western country,” the premier claimed when asked about the implementation of a possible new law prohibiting criticism of the Pakistan Army.

“I use the word freedom very carefully after having spent almost two decades of my life in England where they have very strong laws on slander. There was a defamation case between me and an English cricket star that I won, because defamation laws are very strong there. But such slander laws don’t exist in Pakistan.

He added that as long as criticism was based on truths and facts, it would be accepted. “Every day, our security forces lose people in battle. Every country protects its institutions, not when they do something wrong, but when they’re being attacked.”

When the interviewer pointed out that the new law could make it impossible for journalists to report on the Pakistan Army in the future, he said: “There will be another way of dealing with the security forces — not through the media, but through the government.

“I will speak to the army chief if I think there’s something wrong. There are always human rights violations in military operations and sometimes we speak about it when it happens. But this should not be done in public.

“When soldiers are risking their lives, you cannot demoralise them in public.”

Calling the conflict in Yemen a “colossal human rights disaster”, Imran said he immediately offered to mediate after coming into power.

“I spoke to Iran and then I spoke with Mohammad bin Salman, the crown prince of Saudi Arabia. But you can’t force anybody to agree on peace talks if they don’t want to.”

Commenting on a possible war between Riyadh and Tehran, he said: “It would be a disaster. It would be devastating for countries all over the world, especially the poor, and the price of oil would shoot up.”

Discussing the normalisation of ties between Israel and several countries in the Middle East, the premier reiterated that Pakistan would not recognise Israel until the Palestinian conflict is settled.

“Every country has its own foreign policy priorities. They have to think about their own people and it’s their decision. As for Pakistan, the founder of the nation, Muhammad Ali Jinnah, spoke in the 1940s about the Palestinian situation as a huge violation of human rights.

The prime minister also lauded China reducing poverty and expressed his wish to replicate the same in Pakistan. “What China has achieved is remarkable. I admire China because they have taken 700 million people out of poverty within the short period of 40 years.

“This is the model I want to emulate in Pakistan. Despite not having electoral politics, they are good at bringing the best people to the top in their country. It’s a system based on meritocracy.

“I’ve seen how the Communist Party sort of sifts through all the talent and brings it to the top. Further, in the past seven years, China has put 450 ministerial level officials in jail on corruption charges.”

He added that countries are not poor because of a lack of resources but because of corruption among the leadership.

“As we know from the Panama Papers, the same is true for Pakistani politicians. Millions of dollars went into properties in the most expensive areas in London, siphoned off from this country.”

When asked about the 11-party opposition alliance that has vowed in recent weeks to oust his government, the premier said: “They want to blackmail me into getting them out of corruption cases. But there’s no way I will ever relent.

“We are facing the biggest trade gap in our history. Our imports were $60 billion but exports were only $20 billion. The rupee is falling and there’s inflation because we import fuel. Everything is getting more and more expensive, even electricity.

“We have to raise our revenues so we have to increase our tax base. We’re going through these painful reforms and all these guys from the opposition get together. They are worried that once we stabilise things, they will all end up in jail because of huge corruption cases.”

Pakistan’s handling of the pandemic

Commenting on the nation’s relatively low number of coronavirus cases and deaths, the premier said that ‘smart lockdowns’ were the key to curbing the spread of the virus.

“Almost half of the population survives on daily and weekly wages. Therefore, we imposed a ‘smart lockdown’ [and] only restricted areas where we discovered an outbreak. We didn’t stop supply lines.

“We didn’t stop the agriculture sector and quickly reopened the construction sector because that’s what employs the most people in urban areas. That saved us,” he said. He added that India, on the other hand, restricted people to their homes in poor areas.

“They have a lot of poverty now, same in Iran.”

Asked whether the government has a clear picture of the pandemic in Pakistan, the prime minister replied: “Around 180,000 to 200,000 people are tested every week and our national coordination team looks at multiple statistics and has a very clear composite picture of the epidemic.

“From peak numbers in June, we saw a steady decline in cases, positivity and deaths across the country until late August. Now, we’re hoping to survive the second wave.”

On a lighter note, the premier expressed that his wife, Bushra Bibi, was his “soulmate”.