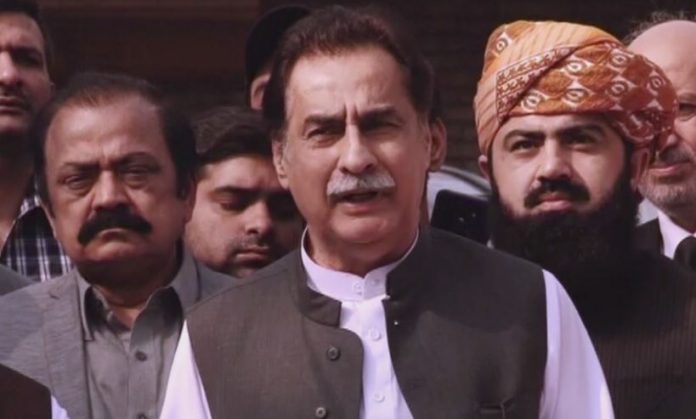 PML-N leader and former National Assembly speaker, Ayaz Sadiq, on Saturday while talking about his recent speech in the lower house said he stands by his stance, adding that he had “many secrets” but never made irresponsible statements.

Sadiq was referring to a speech he made in the National Assembly this week, in which he suggested that the PTI government had released Indian pilot Wing Commander Abhinandan Varthaman in capitulation, fearing an imminent attack from India.

His statement was heavily criticised by ministers and by social media users and also prompted the Inter Services Public Relations (ISPR) chief Major General Babar Iftikhar to hold a presser in which he he sought to “correct the record” regarding the events that surrounded India’s violation of Pakistani airspace last year in February.

Although Gen Ikftikhar did not name anyone, he said “a statement was given yesterday which tried to distort the history of issues associated with national security,” purportedly in reference to Sadiq’s remarks.Talking to the media in Lahore alongside Maulana Fazlur Rehman, head of the Pakistan Democratic Movement (PDM) and chief of the Jamiat Ulema-i-Islam-Fazl (JUI-F), Sadiq said that the “political colour” given to his statement did not benefit Pakistan’s narrative.

“We can have different thoughts politically but where Pakistan is concerned, the whole nation is united and God willing, will give a splendid answer to India. People may have objections to what I said but the political colour given to it did not benefit Pakistan’s narrative,” he said.

“This selected government tried to support the unsuccessful narrative that was being created in India,” he said, adding that the opposition had “strong reservations” about the government on what he termed its silence on Kashmir and its foreign policy failures.

“But these are political differences. Their attempt to associate my statement with the armed forces of Pakistan was not a service to the country. My statement can be seen and heard in which I talked about this government, which government officials misread by adopting Indian media’s strategies. This is not only a blatant plot against Pakistan but is a disservice to Pakistan,” he said.

“You (the government) have played in the hands of Indian media and you have not done justice to Pakistan. I am standing by my stance and you will see in future, I have many secrets. I had been heading the National Security Committee.”

The PML-N leader added that he had, however, never made irresponsible statements and would never do so in the future as well.

“I want to say about this inefficient government, you can fight any political battles you want but political parties will only agree with you when it comes to Pakistan. I request you to keep the armed forces out of this fight.”

Referring to posters put up in Lahore, calling him a “traitor”, Sadiq said such posters were not doing a service to Pakistan.

The PML-N leader said “we are political people” and have been making statements against political opponents in the past and would continue to do so in the future. “But at one point, when it comes to Pakistan or the matter of our unity or institutions, Pakistan’s message to India is very clear.

“We, the Pakistani nation are one. We have political differences with the government but we are united in the matter of India,” he said and requested the media to not “blow up” the matter.

When asked whether he would apologise, Sadiq said he had “not said anything [for which to apologise]” and he has already issued a clarification.

‘Storm in a teacup’

Maulana Fazl said that the government tried to make a “storm in a teacup” of Sadiq’s statement, adding if someone “destroys a person’s character and his patriotism”, then they should be brought back to their “original standing”.

“It is our responsibility to keep our politics according to the law and the Constitution,” he stated.

He further said that the mention of the Pulwama incident indicated the government’s “seriousness”.

He said the PDM has a clear stance. “There was rigging on July 25, 2018. We do not accept the basis of this government. We are steadfast on our stance. Today is the day I was passing to Islamabad from Lahore in Azadi March and I will walk towards Islamabad again.”

“Nobody is above criticism … our institutions are so sacred that they are above criticism. We do not accept this rule. We are against blasphemous attitude, whether related to courts and judiciary or ourselves.”

Maulana Fazl claimed the PTI government had brought “bankrupted the country and Pakistan was at risk”.