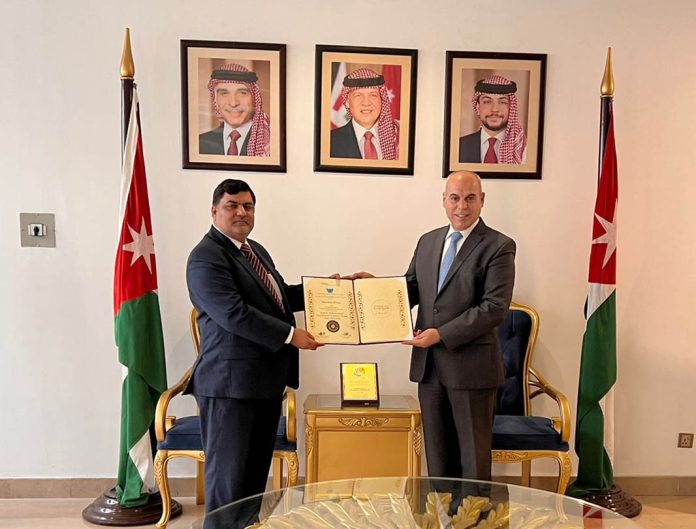 Ambassador of Jordan Ibrahim Al Madani hands over award; Prof Arshad all praise for the Jordan leadership for the honour

To decorate the professor with the prize Ambassador of Jordan to Pakistan Ibrahim Al Madani hosted a small but impressive ceremony and handed over the award to Dr. Arshad Munir.

It may be mentioned here that in 2010 King Abdullah II of Jordan introduced the World Interfaith Harmony Week at the plenary session of the 65th UN General Assembly in New York, making the first week of February of every year a time to bring together all people, regardless of their faith or those with no faith to celebrate religious and cultural tolerance and understanding.

Prof. Dr Arshad Munir while thanking the Jordan government and the Ambassador said that it was a great honour for him and his family to receive great prize from the great country. He also thanked His Majesty King Abdullah II.

He said the initiative of HM King Abdullah to introduce World Interfaith Harmony Week has definitely brought very positive impact in the whole world. The Amman message undoubtedly brought together the most authoritative figures of Islam to denounce terrorism and promote harmony within the world of Islam.