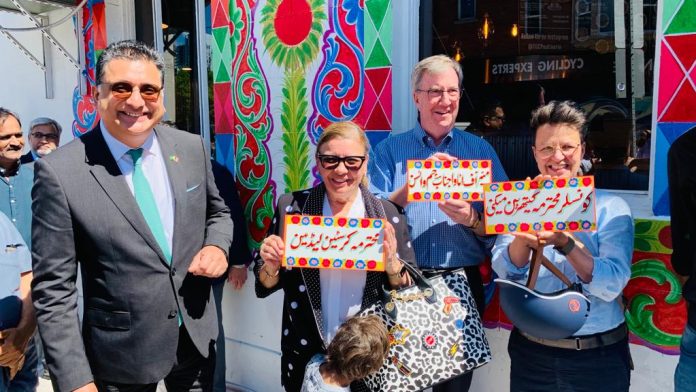 Canadians were treated to a colourful display of Pakistan’s traditional truck art in downtown Ottawa where a wall on the main street was painted live by a team of artists from Pakistan.
Held at the busy Bank Street in the Canadian capital, the event brought together members of the Pakistani diaspora, Canadian government officials, city and public representatives and people from all walks of life to witness a live exhibition of Pakistan’s iconic and vibrant truck art.
Pakistan’s High Commissioner Zaheer A. Janjua. Mayor of Ottawa Jim Watson, City Councillor Catherine McKenney and officials of Global Affairs Canada were also present.
High Commissioner Zaheer A. Janjua told the audience Pakistan’s vibrant truck art was deeply entrenched in its culture and had become part of our social fabric. Pakistan’s truck art has moved from trucks and buses to walls and galleries and now it is doing the rounds around the globe, manifesting its vibrancy and colours, he said.
He said Pakistan High Commission had arranged the exhibition and other events to commemorate 75th anniversary of the establishment of diplomatic relations between Pakistan and Canada. He said Pakistan’s relations with Canada are vibrant, very close and cordial, and this cultural event is a manifestation and demonstration of our friendship.
He also praised the Pakistani diaspora in Canada, calling them a strategic asset and real ambassadors of Pakistan for playing a very positive role in the development of their adopted home and the country of their origin. They are the representatives of both our countries, and a bridge for people-to-people contacts, he said.
Mayor of Ottawa Jim Watson thanked the Pakistan High Commission and the truck artists flown from Pakistan for turning a white wall in the city into a beautiful attraction for the people to come and see Pakistan’s truck art. He welcomed the High Commissioner to Canada, saying Canada enjoys “a very strong, positive relationship with Pakistan”.
Earlier, a similar exhibition was arranged at the Senate of Canada where nearly two dozen Senators and MPs attended the event hosted by Senator Salma Ataullahjan of Pakistan origin from Toronto and Chair of Senate Human Rights Committee, in collaboration with Pakistan High Commission. The Senators not only watched the artists work on the easel with rapt attention but also tried their hand at painting during the exhibition.
During their stay in Ottawa, the truck artists from Pakistan would also display their artwork in the Parliament of Canada before heading to Toronto for similar exhibitions and events in the bustling Canadian metropolis.