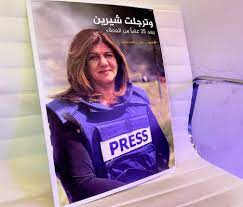 All reports suggest that the Israeli forces intentionally kill Akleh

RAMALLAH: The State of Palestine has rejected the United States’ dismissal of  the Israeli occupying forces’ intentional targeting of Palestinian journalists on 11 May 2022, which resulted in the killing of Shireen Abu Akleh and injury of Ali Sammoudi, as mere “tragic circumstances” and not an intentional war crime.

The context in which the crime took place as well as forensic examination of the General Prosecutor of the State of Palestine and several independent reports concluded that the Israeli occupation soldiers intentionally targeted Shireen Abu Akleh along with other journalists.

No amount of vagueness or politicization can exonerate the killers, whitewash the crime, or hide the truth. This whitewashing will only further institutionalize Israel’s entrenched impunity, continue to deny the Palestinian people any justice, and threaten the safety and lives of journalists in Palestine. It will also have a negative impact on the safety of journalists worldwide.

The State of Palestine, in its pursuit of justice for Shireen Abu Akleh and all Palestinian victims, will continue undeterred with its efforts at the international level, including the International Criminal Court, to hold those who ordered and provide cover for this established trend of criminality accountable for their crimes.