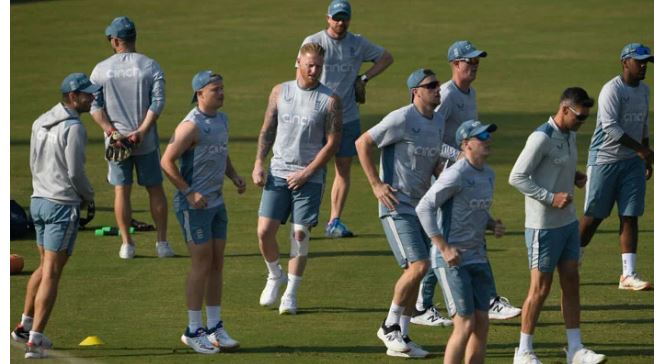 RAWALPINDI: The start of the first Test between Pakistan and England may be delayed as 14 members of the touring party contracted a viral infection and didn’t attend today’s practice session.

“The PCB and ECB are in discussions regarding the commencement of the 1st PAKvENG Test as some England players are down with viral infection,” tweeted PCB.

The board said that it was monitoring the situation and is in contact with ECB. Will provide further updates in due course, it added.

A statement by ECB confirmed the infection in the squad, but it did not mention the number of people affected by the viral illness.

“As far as I’m aware, a few guys are not feeling 100%,” Root said at a post-training press conference. “I didn’t feel great yesterday and I woke up a lot better today. So hopefully it’s a 24-hour virus. Don’t think it’s like food poisoning or COVID or anything like that.

“We are trying to do absolutely everything right to make sure we are prepared for this game.”

Earlier today, BBC reported that at least 14 members of the England squad have been affected by a virus ahead of the first Test against Pakistan in Rawalpindi, which starts on December 1.

According to BBC, the squad members who have been affected by the virus include around eight players.

“The England squad, including captain Ben Stokes, has been affected by a virus on the eve of the first Test against Pakistan in Rawalpindi,” said the British channel.

“Around 14 members of the travelling party of players and coaches were advised to rest at the hotel on Wednesday.

“About half of the playing squad of 16 has been hit, with only five taking part in an optional training session.”

Meanwhile, an ECB spokesperson told Geo News that the English players have not been affected by COVID-19 nor are they showing any symptoms of it.

“The players are ready to play the Test. The medical panel is examining the players,” said the spokesperson.

He added that the player’s health was normal.

England have already named their team for the first Test, with Lancashire all-rounder Liam Livingstone making his Test debut while Nottinghamshire batter Ben Duckett returns to the side for the first time since 2016 and will open the batting with Zak Crawley.

After the first match in Rawalpindi, the second Test moves to Multan starting on Friday, December 9, and the final Test of the tour will take place at the National Stadium in Karachi, commencing on Saturday, December 17.